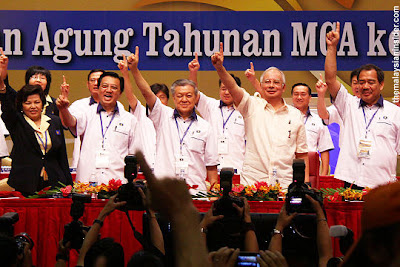 KUALA LUMPUR : Datuk Seri Najib Razak said the Chinese community who likes his leadership, must give solid support to Umno and Barisan Nasional (BN) if they want him to bring more successes to the nation through the national transformation programme.

The prime minister said this in a special interview prior to the 66th Umno general assembly next week, when asked to comment on remarks by political observers, that some parties in the Chinese community liked Najib’s leadership but not his party and BN, and were divided over giving support.

Najib, who is also Umno president, in the one-hour interview with Bernama and Utusan Malaysia, nevertheless, said he saw the wind of change blowing in the level of support towards the government including from among the Chinese community compared to 2008 because they liked the government’s direction.

Commenting further on the parties in the Chinese community who were still divided in their support of the government, he said: “If they want me as the PM who can bring transformation to the nation, as they had been convinced all these while, they must give their support to me.”

“Because a strong PM is a PM who has comprehensive support, so that more successes can be brought to the nation,” he added.

Najib said a prime minister without a comprehensive mandate was weak and could be disputed, including whatever innovation he wanted to implement because any change would face many challenges.

The prime minister said although Umno or BN had several weaknesses, yet they were much better if compared to the opposition pact.

“So if they don’t like UMNO or BN, at least we are solid, having the same aim and talking in the same tone compared to the opposition who are basically at odds, even in terms of ideology. They are also not in tune (among the opposition) as to who will become the PM.

Najib also said in national political system, if the groups liked his leadership, whether they wanted to or not they must give support to his party, namely, Umno and BN.

“Otherwise, another party will be PM and not me. This means, someone else they don’t want will become PM. And the pillar in our system is whoever becomes the PM,” he said.

Commenting further on the increase in support from the Chinese community towards the current government, Najib said he was aware that a change in attitude took time.

Conceding that the government had problems with Chinese voters, he said, nevertheless, the government should not shunt them aside but to intensify engagements to understand their needs and demands, and respond accordingly.

He said he understood the Chinese in towns were not overly dependent on the government but they must be aware their successes as individuals and a community were the result of government policies.

“The government created conducive surroundings where they can find business opportunities, opportunities to develop themselves. If they look at the future, they would also need a country that is well-administered.

“So BN can do this and make adjustments to our policies they are unhappy about and the weaknesses they say we must correct… for example crimes in towns.”

He stressed that so long as the people were not satisfied with the rate of drop in crimes, the effort would be escalated to erase all their concerns.

Najib also refuted allegations by opposition parties that Umno was racist when urging towards the unity of Malays, and purportedly, its struggle was only in the interest of Malays.

“Malay unity does not mean we oppose other races because, as I had said, we must bring other communities together with us.”

“We have carried this spirit since long ago from the time of Tunku (Abdul Rahman Putra Al-Haj) and Tun Razak (Hussein). Why should we set aside what had been founded by our founding fathers.”

Najib stressed that the current Umno leaders, like its founding fathers who set up the Alliance and then BN, were aware the strength of the country hinged on cooperation between the communities.

“This we must hold on to,” he said, adding that several actions which gave the perception that Umno was racist should and would be corrected.

He said, as a result of the efficiency in the administration of the country, the government could ensure quite a strong national economic growth, whereby, the third quarter of this year recorded a 5.2 per cent growth and 300,000 jobs were created.

The increase in foreign direct investment continued to go up from RM5 billion in 2009 to RM29.3 billion in 2010 and RM36.6 billion last year.

“All these achievements, people say went against the world economy,” he said, adding that the nation developed a high level of confidence with the achievements.

The prime minister said the policies and programmes of the opposition as contained in their “Orange Book” and 2013 Budget did not get rave reviews from economists.

“If we ask investment bankers and their fund managers’ financial analysts, they do not give a high valuation to what was forwarded by the opposition. This means that they only see BN as a viable government.”

He said the current national transformation programme to boost Malaysia into becoming a developed and high-income nation could not possibly be achieved in three or four years but needed a much longer time.

“President (Barack) Obama also demanded another term as president (of the United States) because he said it was impossible to make amends on what was done during the tenure of (President George) Bush, in four years.

Furthermore, Najib said if BN received a strong mandate from the people in the 13th general election, God willing, he would commit himself to using his post and the strength of moral leadership to carry out greater and grander achievements for Malaysia. (Bernama)
Posted by sabahkini.net at 17:54