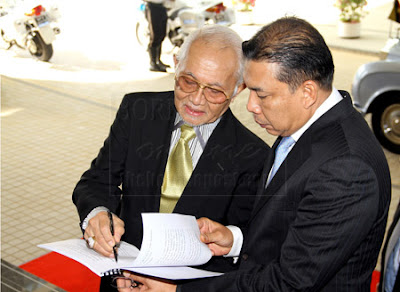 KUCHING: Parties and individuals who oppose development projects by discrediting individuals and running down the government were given a tongue lashing by Chief Minister Pehin Sri Abdul Taib Mahmud in his winding up speech at the last day of the State Legislative Assembly sitting yesterday.

Warning that he would not tolerate such actions he said: “Increasingly, we notice that negative actions are being organised in Sarawak to gain global attention and a handful of local organisers seem to lead this opposition to get funding from foreigners,” he said.

Taib pointed out that although the people were free to assert their wishes in a democratic country, he would not allow systematic campaigns discrediting individuals and even a legitimate government with lies and half-truths wrapped around ignorance and twisted logic.

“Such systematic campaigns which try to prevent a small developing economy (Sarawak) from growing are tantamount to economic sabotage, and warrants a serious response from the government.”

Taib, who is also Finance minister stressed that implementing development projects had their difficulties especially those related to the people.

He added the government had always worked closely with the people in trying to solve issues pertaining to these projects in an amicable manner.

He also told the august House that Barisan Nasional (BN) economic strategy was based on sustainable growth and not economic stagnation.

“We shall constantly explore all avenues for our economy to grow. We have developed with oil and gas, timber and oil palm, and now our development strategy is to develop our energy resources and promote energy-intensive industries,” Taib, who is also Minister of Resource Planning and Environment.”

Taib went on to say that dams were necessary for survival in the modern society, adding that around 1, 600 dams were built around the world, mostly in China, Turkey, Iran and Japan.

He explained that hydro dams had the advantage as a cheaper source of energy as the operation cost was low compared to other resources of producing electricity, adding that most developed countries had benefitted from the development of dams in their drive towards industrialisation.

Taib also said that the state would develop hydroelectric power projects in Sarawak Corridor of Renewable Energy (Score) to ensure success of the development plan.

“We will build the projects whenever there is sufficient market demand. This energy development roadmap is important because it provides the state with a certainty in our future economic direction,” he asserted. (BP)