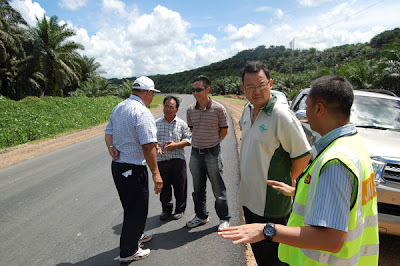 TAWAU: Small compound for overloading and low road quality are among the reasons responsible for causing damage to roads. These are the areas that the government must address in ensuring top quality roads for the people.

Taking more of these issues yesterday, Assistant Minister of Infrastructure Development, Datuk Pang Yuk Ming said RM300 compound imposed on vehicles for overloading was too low compared to the cost of damage to roads while low quality road work paints a bad picture on the government.

“I feel a compound of RM300 for the offence of overloading vehicles is very low compared to the  damage on roads,” he said after visiting the 145.150 km road upgrading project at Sapulut-Kalabakan yesterday.

He said a number of issues need to be addressed in ensuring that the interest of the  community continues to be placed first from the parties responsible on the government infrastructures provided.

Pang said the authorities involved should take into account the damage caused to infrastructure as a result of the offence and the problems faced by motorists when determining the compounds that should be imposed on the offender.

Pang also said the government must ensure that contractors complied with the criteria provided and not for mere profits.

He said the parties involved need to monitor and take action against non-performing contractors.

During the visit, Pang was briefed on the operations of the project by Mohd Dzulkarnain bin Mohd Jame, the engineer responsible for the project.

Dzulkarnain also told Pang of the department’s efforts to address the problem of overloaded vehicles such as installation of CCTV and inspection of heavy vehicles using mobile scales (Mobile Weighing Scale Device).

DzulKarnain also said other efforts were in the form of meetings with logging companies, the police and the Road Transport Department (RTD) and other parties involved.

Kalabakan-Sapulut road-upgrading project costing is expected to be completed in October 2013 but work was progressing ahead of schedule.