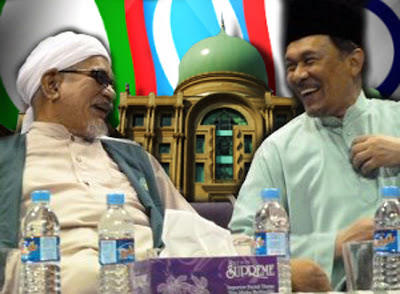 THE ON-GOING debate in the Pakatan Rakyat camp on who can best lead the country should the opposition win in the coming 13th general election is a disaster in the making.

For one, there is no consensus among the Pakatan members on who is deserving of the premiership mantle. PAS believes its president, Abdul Hadi Awang, meets the pre-requisites of a prime minister while DAP says it backs former deputy prime minister-turned-Opposition Leader Anwar Ibrahim.

To have dissenting voices in the Pakatan fold on who is the preferred choice to helm Malaysia is giving its arch-rival Barisan Nasional the much-needed fodder to further discredit the opposition in the eyes of the rakyat.

The people have in the aftermath of the 2008 general election learned to be more selective in their choice of who really is deserving of their trust and support to call the shots from Putrajaya.

But for now, it is important that Pakatan pulls the brake and puts a stop to the “Abdul Hadi Awang vs Anwar Ibrahim as PM” speculation.

What is more urgent is the need to stay united and leave no room for BN to infiltrate and subvert Pakatan’s efforts in staying in the good books of the people.

Whether it is Hadi or Anwar or Lim Guan Eng, for that matter, is not the issue; the point that needs to be driven home is that the premiership is not for the popular but instead is an arduous responsibility that requires the right aptitude.

Hence, the need for Pakatan to take a good and hard look at who is the right candidate for the job.

Does Pakatan have the answer as to which candidate is the perfect pick? Are the names that are being mentioned truly deserving or is it a case of “popular appeal”?

Should Pakatan outdo BN in the 13th general election and land in Putrajaya, the rakyat will in no way tolerate any BN-like shenanigans by the opposition.

With that in mind, Pakatan must be very sure whom it wants to place in the premier’s chair.

Is Anwar the right candidate, despite the many controversies surrounding him? Or is it the scholarly Hadi whom the rakyat can depend on to navigate the nation to greater heights?

For now, with time still on its hands, the opposition has to double up efforts in sustaining the rakyat’s trust in it, instead of politicking and appearing disinterested and disunited.

Maybe that is why former prime minister Dr Mahathir Mohamad seized the opportunity to take a swipe at Pakatan and its over-enthusiasm in name-dropping for the premiership.

As usual, taking liberty with his words, Mahathir says even the former Tiger of Jelutong and DAP chairman and no-nonsense lawyer Karpal Singh will be gunning to become the next prime minister.

Sounding callous as ever, Mahathir, who thus far holds the record for being Malaysia’s longest- serving premier, is implying that greed for power has become the order of the day in Pakatan’s fold.

“Let Karpal be the PM. He, after all, has fought for so long. And when he retires, Karpal will receive the Tun title,” was how Mahathir put it.

Serving the rakyat, not thyself

Mahathir’s sarcasm is troubling for it points to the fact that politicians have no interest in serving the rakyat and are only on the lookout for self-gratification, that is, aiming for honorifics.

Here, who better to prove him wrong than the Pakatan pact, provided the members speak in one voice, giving the rakyat the assurance that they have what it takes to govern the nation.

In this regard, it will be in Pakatan’s best interest to learn from the mistakes of BN which, despite having led the country since independence, failed to clean up its act and continued to remain arrogant, until its unexpected losses in 2008.

For the rakyat’s sake, remember that the prime minister’s seat does not “belong” to any one particular person. It is a duty and obligation to steer the country in the “right” direction, serving only the interest of the people.

Until then, it is wise for Pakatan to focus on the many tasks at hand and put “who best be PM” speculations to rest. (FMT)
Posted by sabahkini.net at 12:21