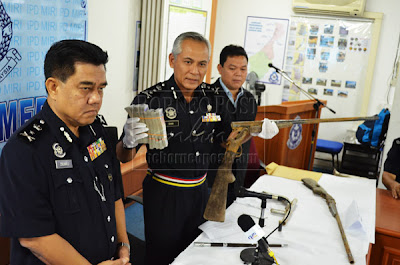 EXHIBITS..... Acryl (centre) shows some of the items seized from the suspects as Zulkifli (left) looks on.

MIRI: In the latest update on the RM1.35mil heist in Beluru-Lapok road earlier this month, police have successfully recovered RM832,887 of the stolen money, and are still hunting for three more suspects.

State Police Commissioner Datuk Acryl Sani Abdullah Sani said the money was recovered at various locations, and reiterated that they were determined to locate the balance which might be in the hands of three other suspects who were still at large.

“We will try to get back as much cash as possible.

“We understand that some of the money has been spent by the robbers on many things, namely buying household items, furniture, laptop, motorcycles and some used for partying,” Acryl said at a press conference held at the police headquarters here yesterday.

The police also seized three guns, of which two are shot guns, a pistol, a car and other items believed to have been bought using the stolen money.

On the three suspects still at large, police are seeking help from members of the public to provide information.

“One of them is the third mastermind in this case. So, we really appreciate it if the public can help us to track them,” he said.

He also said the investigation papers would be referred to the Senior Federal Council (SFC) for the suspects to be charged without delay.

Acryl also urged all companies intending to carry large sums of money to seek help from the police to avoid such incidents from happening again.

“It is more like a habit among Sarawakians to carry lots of cash and not ask for police escort.

“When they do that, they are actually opening opportunities to those who would take advantage of them,” he added.

When asked if the case was the biggest achievement for the state police thus far, Acryl said he was proud of the hard work and speedy investigation carried out by his officers and personnel.

“This case is of course our biggest success thus far because it did not only involve a large sum of money but also a foreign company,” he said.

On Nov 6, four men were robbed at Beluru–Lapok road at about 3.10pm by a group of more than seven masked men armed with two shot guns.

The victims, three Indian nationals and a local, were sending a payroll of RM1.35mil belonging to multi-national company Punj Lloyd Oil and Gas (M) Sdn Bhd from Camp 5 to Camp 6 in Long Lama, Baram.

The robbers hit and overtook the victims’ blue Toyota Hilux and took away the cash.

Following their report that was lodged at Beluru police station on the same day, Marudi police set up an investigation team and sought help from Bukit Aman, Miri and Kuching police.

The formation of the team led the police to the arrest of 10 suspects thus far, of which three are workers of the multi-national company.