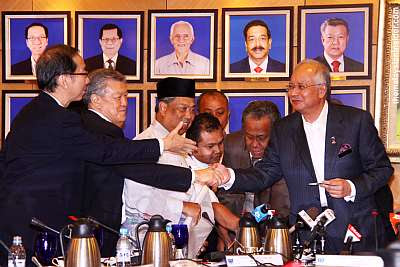 KOTA KINABALU: Parti Bersatu Sabah (PBS) should not spend time talking about seats that are allocated to other Barisan Nasional (BN) component parties.

“It is better for PBS to put its energy and resources to work closely with other component parties of the BN rather spending time talking about claiming seats that have been traditionally allocated to other component parties,” UPKO secretary general Datuk Wilfred Madius Tangau said when asked to respond to requests by PBS members for the party to be given seats that were allocated to UPKO during the party’s 27th annual congress recently.

Bingkor deputy chief Vistor Anahong made a similar call with regard to the Bingkor seat.

Tuaran is currently held by former UPKO Deputy President Datuk Seri Panglima Wilfred Bumburing who left the party and BN while Bingkor is held by Datuk Justin Guka of UPKO.

Stephen reasoned that it would make it easier to administer the parliamentary constituency as two of the three state seats under Tuaran, namely Tamparuli and Kiulu are held by PBS.

“This is not us being rude or stepping on other people’s toes, but this will make our job and BN’s job much easier, like in Kota Marudu where both the state and parliamentary seats are held by the same party.

“We simply want the BN leadership to consider the proposal, bearing in mind that it is in line with the coalition’s objective to field the best possible winnable candidates, and I sincerely believe that is us,” said Stephen.

When making suggestion, Vistor said he wanted the division’s chief Peter Jino Allion to be fielded to represent BN in the constituency in the coming general election.

Vistor said BN needed to have a convincing majority in at least two seats under Keningau in order to fully secure their position in the parliamentary constituency.

With PBS already dominant in Tambunan through Tan Sri Joseph Pairin Kitingan, Bingkor would make a useful addition in ensuring a bigger victory for BN.

He noted that PBS had won election after election with a huge margin in Bingkor before the seat was given to other BN component party.

And with Bingkor being retained in BN through a small majority of only over 100 votes in the last general election, Vistor said it is time for BN leadership to consider giving the seat back to PBS. (BP)
Posted by sabahkini.net at 13:11