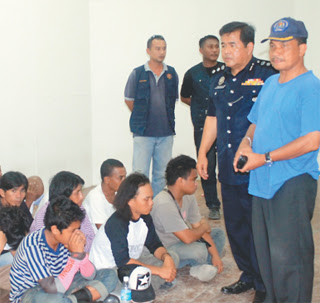 KOTA KINABALU: The Federal Special Task Force (Sabah and Labuan) rounded up a total of 501 foreigners aged between 16 and 58 for inspection in a joint operation called 'Ops Tanduk', Saturday.

This was the second series of the Ops Tanduk conducted by the Federal Special Task Force (FSTF) with the collaboration of the National Registration Department and the police.

Its Director Datuk Suhaimi Salleh said the first series was conducted in Lahad Datu from Nov 7-8 in 10 locations with a total of 519 foreigners rounded up.

He said this when met at the Tanjung Aru Community Hall where those rounded up were brought for inspection.

"In this second series, out of the 501 foreigners rounded up, a total of 310 comprised Filipinos, followed by 80 Indonesians and 111 others.

"A total of 220 were brought to the documentation centre, out of which 188 were Filipinos, 31 Indonesians and one other."

He said 179 were remanded and out of these 160 were Filipinos comprising 101 men, 32 women and 27 children, while the remaining 19 were Indonesians comprising 13 men, four women and two children.

"The operation which started on Nov 23 and ended on Nov 24 was conducted in 12 separate locations in Sepanggar, Menggatal and Inanam involving squatter homes and contract workers' quarters, among others," he said.

On another development, he said the Ops Tanduk was also conducted in three separate locations in Penampang, with 139 foreigners rounded up for inspection comprising 48 Filipinos, 49 Indonesians and 42 others.

He said out of that figure, a total of 48 people were taken to the documentation centre comprising 22 Filipinos, 22 Indonesians and four Pakistanis, while 31 people were remanded comprising 19 Filipinos out of which 12 were men, five women and two children.

"This was followed by 12 Indonesians comprising five men, five women and two children.

Those remanded are sent to the temporary detention centre in Papar for further action by the Immigration Department.