THE TOASTMASTER CLUB FINDS A FOOTING IN MRDIT 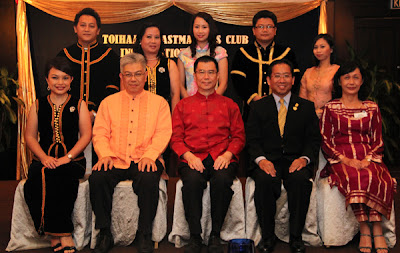 INSTALLATION....... Minister of Resource Development and IT Datuk Dr Yee Moh Chai having a group photo with the Toastmaster Committee members after the Installation of the 2012/2013 Executive Committee.

“We are very proud to be the first ministry in Sabah to join the Toastmaster Club and hope other ministries and agencies would also join the club,” Datuk Dr. Yee Moh Chai, Deputy of Chief Minister said at the 1st Dinner Installation of Toihaan Toastmaster Club under his ministry.

He said the Toastmaster Club seeks to help people to develop self-confidence in public speaking and thereby promotes self-development, which is part of human resource development.

The Toihaan Toastmaster is one of 25 clubs in the District 87 divisions that cover Sabah, Labuan and Brunei. Currently they have 33 members from the ministry, agencies under the ministry and NGOs such as SATA and entrepreneur organisation. (Insight Sabah)
Posted by sabahkini.net at 12:44