A FESTIVAL TO PRESERVE A CULTURAL HERITAGE 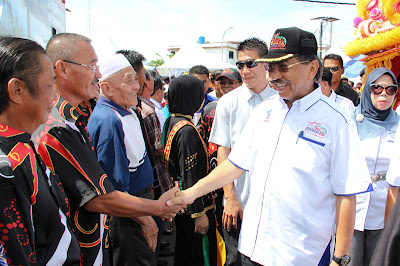 GREETING......Chief Minister Datuk Seri Panglima Musa Aman being greeted by the people when he arrived to attend the Bagandang Festival 2012 in Beaufort.

THE ANNUAL Bagandang Festival in Beaufort celebrates some of Sabah's well known traditional musical instruments such as Kulintangan and mini brass gongs played during weddings. This year, the Festival was held between 22nd and 25th  November. The four-day festival with the theme ‘United in Upholding Culture’ was launched by the Chief Minister, Datuk Seri Panglima Musa Aman Hj. Aman on the 24th of November.

Commenting on the festival the Minister of Community Development and Consumer Affairs, Datuk Azizah Mohd Dun, said that the Bagandang Festival was intended to unite people of different races in Sabah, to promote arts and cultures and to instill better appreciation of local cultures among Sabah's youths.

“The civilization of a nation is embodied in its cultural heritage, which should be maintained to preserve the nation's own identity. We need to have our own identity for the world to recognize us. Therefore, I see this festival as stamping the brand and identity of Beaufort,” Azizah said.

This year, some 5000 visitors came to witness the festival. They came not only from Beaufort district itself, but also from Sarawak, Peninsula Malaysia and Brunei.

The Chief Minister said an important aim of this festival is to showcase local musical instruments and some of the cultures of Sabah, especially those of Beaufort origin. “We have more than 30 races in Sabah, and in Beaufort. We are all a combination of various cultures and religions and this festival is an occasion  to bring Sabahans together to strengthen relationships and to ponder the message of unity,” Musa added.

Musa also reminded the gathering what the Prime Minister, Datuk Seri Najib Tun Razak once said about Sabah being an exemplary state that truly epitomises the spirit of 1 Malaysia.

“We are all a family in Sabah and that is the beauty of Sabah” he said. 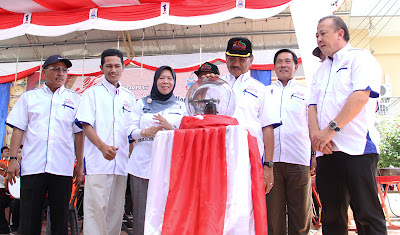 According to the Population and Housing Census of Malaysia 2010, Beaufort has a population of 64,756 people made up of Bisaya, Kadazandusun, Murut, Kadayan, Chinese-Malay, Indian, Bugis and Jawa to name only a few ethnic groups. Musa said Beaufort is located in a very strategic place in the region and the Bagandang Festival is a perfect event to promote Beaufort to the outside world.

Speaking about the festival four years after it was first held Azizah said that it has resulted in many new talents being discovered such  as Razali Abdul Rahim from Kampung Rancangan Klias, Beaufort, who won the Malaysian TV talent-show and the international  World Art Competition (WCOPA) Road to Hollywood in Los Angeles, America.

“Such achievements make us proud and we encourage more newcomers to develop their artistic talents and make a name for themselves,” she said. (Insight Sabah)