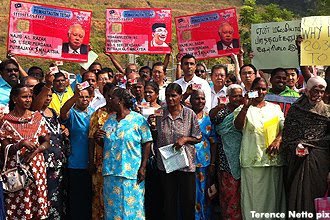 KUALA LUMPUR: The Pakatan Rakyat will hold a sit-in outside the National Registration Department on Dec 12 to protest at the plight of the stateless Indians in the country.

Announcing this after lodging a police report over a stateless Indian case, PKR vice president N Surendran said they would hold a sit-in outside of the National Registration Department (NRD) to demand solution to the long-standing issue.

“We will not move until home minister and prime minister promises to resolve the problem facing some 300,000 Malaysian Indians,” he said.

Surendran said the government has breached the Article 14 of Federal Constitution by denying  Letchumy’s rights to identification document.

“Article 14 says that those who born in this country are automatically  citizens of this country. Don’t tell me the government doesn’t know anything about this,” he said.

Manikavasagam said his deceased mother only obtained her identification card (IC) after she passed away.

“When she was still alive, we called the NRD for more than ten times but still couldn’t get the IC,” he said while criticised the government for being insincere in resolving the problem. (FMT)