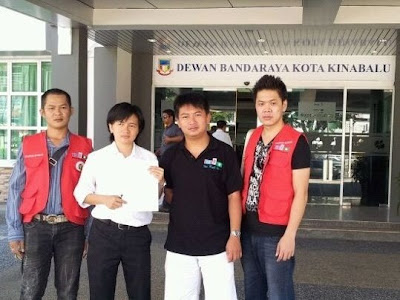 "We have received many complaints from concerning citizens. They all wanted to know the results of the investigation to assure them that Likas Bay 21 is safe for occupation. The authorities or parties involved (DBKK and DOSH and Developer) have never explained on the allegation thoroughly. People are not convinced," said Joan,

Joan was very concerned citing public safety should have been the top priority at any time but it was clearly disregarded in this particular case.

She also reminded Mayor that  it was public knowledge already and Datuk Masidi, Minister Of Tourism already voiced out publicly and cabinet already requested a report so that the public can be assured of its safety.

Joan Goh, who was also the DAP Sabah State legal advisor, expressed regrets that contractor workers had continued to work to remove the collapse sections to clear the debris. She has photos and witnesses to confirm that.

These evidences points to DOSH and relevant authorities and Developer breaking all safety laws to force workers to work on a collapse site without an investigation by engineers to first declare it is SAFE to avoid potential death of workers in a danger zone.

"How come issue of safety of workers forced to work on collapsed site to clear fallen debris evidence without first ensuring that site is safe WAS NOT RAISED?" Joan asked.

DAP Sabah wanted Dato Mayor to make this investigation reports & results open to public, transparent as this is a public concern issue and public has the rights to know whether the building is safe. Joan concluded. (DAP Media)