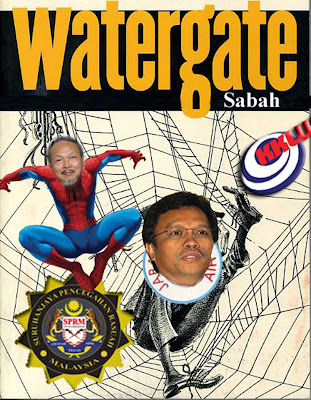 THE PROJECTS under taken by the Federal Ministry of Rural Development and Federal Territories in Sabah are with slow progress. There is so many works to be carried out and to be completed.

Just as an example, the works set out by this ministry which were approved and started since 2011 and suppose to be completed by 2012 were not completed. In Kota Belud for example there are 49 projects under the Project Bekalan Air Luar Bandar (BALB) with a cost of RM104.76 millions to benefit 6,786 houses.

For the rural road development under JALB in Sabah, there is an allocation of RM2.0 billions to build 180 rural roads which added up to 1,036 KM. In Kota Belud district a sum of RM100.76 million was allotted to build 9 rural roads with a total length of 54.93 KM.

The above mentioned development projects, some had not started, some are under construction and some are still under “negotiation”. It is surprise to learn that until today we still find the work proposed by the Federal Ministry of Rural Development are falling behind schedule, and it will be interesting to know the actual progress of these projects.

Big sums of money had been allocated but we see not much progress, thus this remains as “empty promises”, and the wait of the people to receive the much needed utility services and roads continue.

The money allocated has not been spent effectively and fully, the end sufferers are the people in Sabah. The people lost their chances to enjoy better utilities and road improvement and they continue to suffer.

This situation is proven and seen in many rural areas in Sabah where we still have no water and electricity. The bad kampong roads and some areas still without roads linking to the towns are common sights. We wonder how much of the RM2.0 billion promised sum to build roads in the rural districts had been spent and how many kilometers of these roads were built and ready for traffic.

These projects were not tendered out but merely awarded through “closed door negotiations” as stated in the Ministry reply to a question asked in the Parliament. The word “negotiation” has brought implication as far as the execution of the projects. For one, the contractors may not be qualified, no experiences, 'Ali Baba' type - without even a 'changkul' or spanners and screw driver.

How can the government award the contract to build a million Ringgits road in the kampongs. This situation will be worst when the politicians, the main contractor, the sub-contractor, the sub sub-contractor took and sucked away at least 45% of the total contract sum for doing nothing, and left the last person on the line to do all the donkey work to make the money for them.

The work is usually abandoned when the last contractor can not sustained the heavy burden to dish out the money from the projects to feed them. Is this a fair game and a good way to execute and implement the projects? (DAP Media)