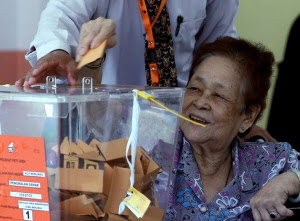 KOTA KINABALU: Civil society group, Demokrasi Sabah (Desah), will hold a public forum next month in anticipation of the impending general election and the expectations of voters.

Titled “Malaysian Voters – What we expect from the incoming government”, the forum will focus on youth, economy, native issues and the environment.

In a statement issued yesterday, the organising committee said the forum is tentatively set to take place on Feb 17 at the Star City Conference Centre and will be moderated by former Sabah state secretary Simon Sipaun who is the chairman of Desah.

The forum will be different in that leaders and representatives of all political parties in the Barisan Nasional coalition as well as the opposition will attend but will not be speaking.

The speakers will all be members of the public. The party representatives will instead be asked to answer queries from the public or give explanations on issues.

The forum is open to all citizens and seating will be on a first-come first-served basis.

This forum may be the last of its efforts to help communicate the desires and aspirations of citizens to political leaders.