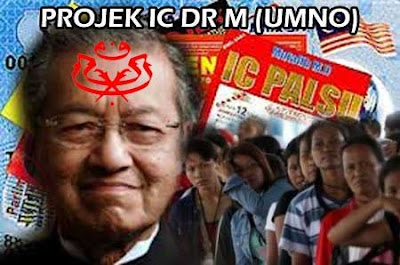 CITIZENSHIPS.....Thousands of natives are stateless in Sarawak bcause there are those 'who make the rules and directives' and those 'who take it upon themselves to decide who deserves citizenships'.

KUCHING: The ongoing Royal Commission of Inquiry (RCI) hearing on illegal immigrants in Sabah has rankled many people in Sarawak. Former civil servants who served under then prime minister Dr Mahathir Mohamad, illegal immigrants and refugees have all revealed how citizenships had been given out clandestinely.

These revelations have left a bitter taste in Sarawak where thousands of Christian natives are still stateless.

Said Ba’ Kelalan assemblyman Baru Bian: “Reading the testimonies of the various witnesses at the RCI hearings, I cannot help but feel intense anger at the betrayal of our people by Mahathir through his clandestine and illegal ‘Project IC or Ops Durian Buruk’.

“This exercise in social engineering is all the more reprehensible because of main requirement that the illegal immigrants must be Muslims to be eligible for ICs and citizenships.

“But what is most galling and bitter to me is that while Mahathir’s henchmen were merrily handing out ICs and citizenships to Muslim illegal immigrants in Sabah, even to those who had not applied for them, thousands of our own people were being given the run-around when they applied for birth certificates and ICs.

“In fact, many of them are still stateless today. These people were born and bred on Sarawak soil but for various reasons [such as the long distance to the district office), their parents failed to register their births.”

Bian, who is a senior native customary rights lawyer, said for years he has been trying to help natives to apply for citizenship but with limited success.

“There are copies of many application forms in my office which were rejected or given no response by the authorities.

"There are some who were given temporary ICs with expiry dates on them, which I cannot fathom," he said.

Discrimination At Every Level

According to Bian, there are two groups of officers – those who make the rules and directives and those who take it upon themselves to decide who deserves citizenships.

“Those who take it upon themselves to decide which forms to process and which to ignore, do not seem to be aware of the grave consequences of their actions on the common people.

“There is a Sarawakian working in West Malaysia who cannot come home now because his temporary IC has expired.

"I had a schoolmate in Tanjung Lobang who was a very bright student, but he was unable to further his studies because he had no IC.

“And we are now reading about illegal immigrants who managed to prosper in Sabah just because they were of the ‘right’ religion for the purposes of Mahathir’s evil plan,” said Bian, who is also the state PKR chief.

Bian said the only obvious conclusion after reading the testimonies of the witnesses is that Mahathir’s repugnant Project IC was motivated by his desire to hold onto power at all costs.

"“It is very plausible now that they [Barisan Nasional] would replicate Mahathir’s dirty tactics to retain Putrajaya.

“Bersih’s demands now take on more urgency and the Elections Commission must implement the measures demanded before the 13th general election,” Bian added. (FMT)
Posted by sabahkini.net at 10:11