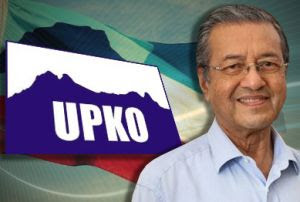 DISCOURAGE ....'Negative discussions' and comments will discourage witnesses who are yet to give evidence from coming forward, claims UPKO.

PENAMPANG: A frazzled United Pasokmomogun Kadazandusun Murut Organisation (Upko) has urged the public to refrain from gossiping and making comments about the Royal Commission of Inquiry (RCI) hearing on illegal immigrants until it is completed.

The plea comes as the Sabah Barisan Nasional  coalition partners come under increasing scrutiny by their supporters over their collusion with Umno to form what many now believe to be an “illegal” government.

The Sabah BN component party along with counterparts Parti Bersatu Sabah, Parti Bersatu Rakyat Sabah and the Liberal Democratic Party are all struggling to explain their presence in the coalition in the light of damning evidence that they all benefited from a government-sponsored citizenship-for-votes scheme implemented in the 1990s.

Upko’s plea is the umpteenth overt call from the state government to stifle public debate and reports of the ongoing inquiry.

Sabah Chief Minister Musa Aman has also called in newspaper editors and warned them against 'sensationalised' reporting of the proceedings.

Upko’s deputy secretary-general Lucas Umbol has justified the call, saying that “negative comments” could discourage the witnesses who are yet to give their evidence from coming forward.

He was responding to the scepticism expressed by some quarters on the integrity and independence of the RCI to investigate the extraordinary increase in the population of Sabah by the BN administration.

“Witnesses who have testified so far have been giving their evidence and statements with ease without fear or favour.

“Therefore all quarters should withhold their comments as their comments could intimidate incoming witnesses and prevent them from giving evidence without fear.

“No one should make any conclusion at this point in time because there are still many more witnesses to come and members of the RCI need to be given ample space and time to complete their investigation,” said Lucas, a member of the party’s Tenom division.

He said comments and opinions should only be given after the RCI had completed its public inquiry and the report was written and made public.

Witnesses giving testimony at the RCI, many of whom were senior federal civil servants, have startled the country with their disclosures that the federal government had a hand in the massive population explosion of the state, especially in the 1990s, which was mainly done to ensure Umno and the BN would take and keep control of the state.

Former prime minister Dr Mahathir Mohamad, who was in power at the time, has since declared that “there was nothing wrong” in giving tens of thousands of immigrants in Sabah citizenship as long as it was done legally.

However, witnesses have revealed that in many instances the operation to grant citizenship and voting rights to immigrants and operating out of Kuala Lumpur did not seem to follow legal procedure and was done in a furtive way.

Many BN party supporters are asking awkward questions about how their party leaders could justify their presence in the coalition in the light of the testimonies that government candidates had benefited from the votes of the “new Malaysians” in past elections and in the process had disenfranchised Sabahans.

Lucas added, however, that the present BN administration led by Prime Minister Najib Tun Razak had proven that it wants to set matters right by establishing the RCI on the issue.

“The Najib administration represents a new and transformed government. Najib is genuinely implementing political transformation as evidenced in the government’s decision to abolish several laws which have been described by various quarters as draconian such as the Internal Security Act (ISA) and the Universities and University Colleges Act and the like.

“Surely, the prime minister must have faced various challenges in arriving at the decision to establish the RCI.

“However, the challenges are understandable because the extraordinary increase in the population of Sabah is historical in perspective and all of which happened during the tenure of two previous administrations,” he said.

He also disclosed that the party’s secretary-general Madius Tangau, who has been outspoken on immigration problems faced by the state, has been subpoenaed to appear before the RCI as a witness.

The public inquiry is set to resume today after a week’s break. (FMT)