UMNO THOUGHT I WAS ‘OPPOSITION’ EVEN THEN 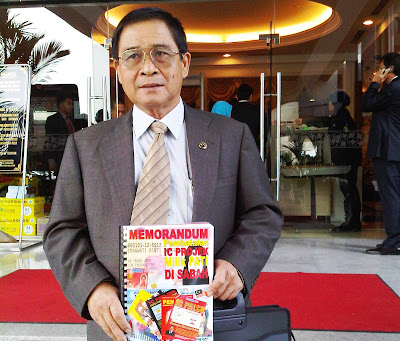 RECORD.....Incumbent Tuaran MP, Wilfred Bumburing, who is expected to stand on a Pakatan Rakyat ticket has defended his 'record' while in BN.

Hajiji, who is Tuaran Umno chief, had accused Bumburing of being an 'opportunist.'

Hajiji held that when Bumburing was in the government and a minister, he sang the praises of the BN every day but was now saying the opposite.

Voters, Hajiji said, should judge for themselves which is glass and which is crystal.

But Bumburing, who now heads Angkatan Perubahan Sabah (APS), a political platform he and other former BN component party leaders established to assist Pakatan Rakyat in the coming general election, defended his past actions saying he was merely doing his job as Tuaran MP.

“I never sang praises about the ruling party every day while I was in BN. Of course I did commend any government policy that was being implemented by the government which could bring benefit to the rakyat,” he told FMT.

He said that some of criticism of government policy when he was still in the BN was seen as an attack on the government and some Umno MPs had demanded that he state whether he was with the  government or the opposition.

Bumburing, who won the Tuaran parliamentary seat on an BN-Upko ticket in 2008 and left the coalition in July last year, found it ironical that Hajiji should quote Lincoln, as voters now believe that it is the Umno-controlled government who have “behaved arrogantly in Sabah for almost 19 years” and “they can no longer fool all the people all the time”.

Bumburing added that Hajiji, his one time colleague in the Sabah State Cabinet, was also aware that voters were unhappy with the BN-Umno state and federal governments and the ruling coalition which had outlived its relevance.

The Tuaran MP caused a shock last year when he and Beaufort MP Lajim Ukin quit the BN and said they were now Pakatan supporters. Both won their seats in the previous election on BN tickets.