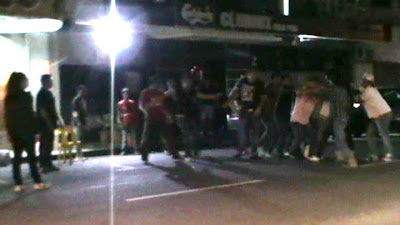 BETWEEN 3.15 to 4.00 am on 29th Jan 2013, I went for a very early breakfast at the foodstalls or restoran 126 at Bandar Penampang on the opposite end of Servey Supermarket.

Just as I was about to enjoy my food, a bunch of drunken hooligan came out of the nearby nightclub (I believed it is called Clubmix) and started a wild drunken brawl as can be seen from this video grab.

Tables and plastic chairs from the restoran were broken when some used the chairs to beat their opponents. At least one of the food shelf was overturned.

I had no choice but to leave my food untouched since their fight is non of my business but as I walked away, I had time to observe the following.

1. Half a dozen men in RELA uniformed came from the direction of Servey supermarket, but stood at a distance afraid to take any action but from the sound of their talk it seemed they recognised who were involved.

2. The Rela men only came to the scene after about 20 minutes when 3 police car turned up with their sirens blaring. No arrest were made while only one man was still screaming stupid nonsence.

3. One man with a cap from one group talked to the cops near the squad car, after which the 3 police car simply high tailed from the scene like  dogs with tails between the legs. I was surprised no one was detained.

4.  As i droved away from the area, I saw a caucasian with a girl which look almost like a Pondan who came out from the club.  The foreign looking girl stuck her tongue out in my direction and tried to kick my car for reasons unknown. I can only guess that these night time ladies could be one reason that started the brawl.

Later that day I came back to the restoran and a worker told me that one of the drunken patron was a son of a Datuk who is also one of the State Leaders and definitely is a moslem. No wonder there was no action from the police.

How come all the nightclubs and pubs in this area are opened until the morning which are the causes of fights and brawls and the present government simply close their eyes? Do some in the authorities have a share in these night time business or what?

Instead of making an issue of fake Bibles, the Sabah PAS and PERKASA should be harping with my full support on these illicit nightclubs and do a check on whose Datuk's son is getting stoned there.
We heard about the actress who was sentence with caning for sipping a beer, how about these drunken Datuks and their sons?

KDM VIGILANTE
Posted by sabahkini.net at 08:17