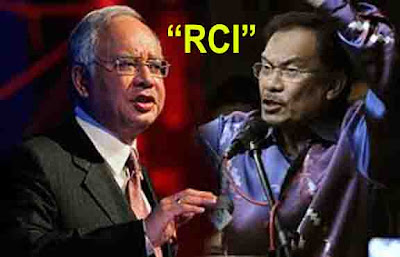 He asserted that Anwar was duty-bound to do so as he was Deputy Prime Minister at that particular period, adding that "he was a powerful man and knew what was going on in Sabah".

"Don't be a hypocrite, perhaps with the inside knowledge, Anwar can help shed some light...so tell the truth to RCI. He must not play politics.

At least (Datuk Seri) Najib (Tun Razak), our Prime Minister is prepared to seek the truth and approved the formation of RCI to identify the roots of the problem.

"We should not come into a conclusion and blame certain parties just because of statements by few ex-ISA (Internal Security Act) detainees.

We should let RCI complete its work...What we want is a permanent solution," he said, after attending a meet-the-people session at SK Sembirai, near here.

In this respect, Salleh, who is also State Legislative Assembly Speaker, said the people should praise and support Najib for his bold move to form the RCI.

"Once the RCI completes its task then the Government will study and act on it accordingly to resolve the matter once and for all.

That should be the way," he said.

Expressing confidence that the illegal immigrants' problem would be resolved by the Government under Najib, Salleh said genuine Sabahans must be patient to wait for a permanent solution.

The setting up of the RCI and appointment of its chairman and members was announced by the Prime Minister Menteri on Aug. 11 last year to solve the problem of illegal immigrants in Sabah.

The hearing of the proceedings was headed by former Chief Justice of Sabah and Sarawak Tan Sri Steve Shim Lip Kiong.