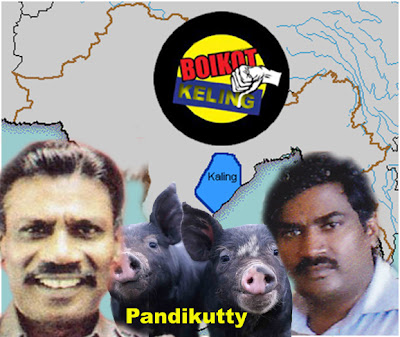 KOTA KINABALU : An Indian immigrant told the royal inquiry on illegal immigrants here today that he received a blue identity card without providing any supporting documents, but only with a false application form filled by a National Registration Department (NRD) officer.

Nasir Yusof (right), who was born in Tamil Nadu, India, testified today that he obtained the blue identity card from the NRD Kota Marudu office in Kudat in 1988, just five years after arriving in Sabah in 1983.

“Who told you to write (that you were born in) Tuaran (on the application form)?” asked Sabah Law Association president Datuk John Sikayun, who was holding a watching brief at the Royal Commission of Inquiry (RCI) today.

“He already wrote it down — the JPN officer at Kota Marudu,” replied Nasir, referring to the NRD by its Malay acronym.

“I did not pay anyone else,” he said.

According to the Citizenship Rules 1964, people who want to apply to be a Malaysian citizen by naturalisation must become a permanent resident for more than 12 years and have been in Malaysia for more than 10 years.

Nasir said he registered as a voter in 1991 and has voted three times since, including in the Sepanggar parliamentary constituency.

“The one I voted for lost. It was a PBS (Parti Bersatu Sabah) YB, but (the candidate) lost,” he said, as the gallery burst into laughter.

He said that he charged a service fee of RM100 per worker.

Nasir added that about 100 Indian immigrants were also with him at the Kota Marudu NRD office when he applied for the blue identity card.

He said that not all of their places of birth were stated as Tuaran in their application forms.

“He (the NRD officer) was the one who wrote it as we could not write in Bahasa Malaysia,” said Nasir.

“Those blogs are 100 per cent defamatory,” he stressed.

Nasir said that he gave up his Indian passport and obtained a Malaysian passport after receiving his blue identity card.

“I don’t have Indian citizenship (anymore). I never voted in India. I can only vote here,” said Nasir, who wore a white long-sleeved shirt.

He then recited the Rukunegara, albeit with some mistakes.

Other Pakistani and Indian immigrants have testified recently about obtaining blue identity cards, either from runners or from the NRD directly  within just a few years of arriving in Sabah.

An Indian immigrant told the RCI yesterday that he received a blue identity card from the NRD after staying in Sabah for six years, by just producing a statutory declaration that wrongly stated his place of birth as Papar.

Tun Dr Mahathir Mohamad, the country’s longest serving prime minister who was in power from 1981 to 2003, has been accused of spearheading the so-called 'Project IC', in which citizenship was allegedly given to immigrants in exchange for their votes.

But former Sabah Chief Minister Tan Sri Harris Salleh, who administered the state from 1976 to 1985, denied to the RCI the existence of “Project IC”.

Dr Mahathir told a press conference recently that foreigners in Sabah had indeed received citizenship, but stressed that it was 'within the law'.
Posted by sabahkini.net at 01:20