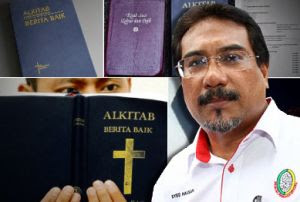 CONFUSE ....Malay rights group, Perkasa, defends its chief’s call for the burning of Malay Bibles with the word ‘Allah’, as they are only meant to confuse Muslims.

KUALA LUMPUR: Perkasa has defended its chief Ibrahim Ali’s call for the burning of Malay Bibles which contained the word “Allah” by insisting they are not “real Bibles”.

“Perkasa feels that a Bible written in Malay is enough of an attempt to confuse Muslims, especially schoolchildren, what more a Bible that uses the word ‘Allah’ and is written in Jawi.

“Thus Perkasa feels that a Bible like this is not a real Bible and is nothing more than an attempt to confuse Muslims into leaving Islam and converting to Christianity ” Perkasa secretary-general Syed Hasan Syed Ali said in a press statement last night.

He said this alleged attempt to convert Muslims to Christianity was the very reason why Perkasa was “extremely firm” in requesting that the government take action against the use of “Allah” in Malay Bibles.

Syed Hasan was commenting on Ibrahim’s call to Muslims to seize and burn copies of Bibles which contained the term “Allah” or other Arabic religious words.

“Muslims must unite to protect their religion. They must seize those Bibles, including the Malay editions, which contain the term Allah and other Arabic religious terms, and burn them,” Ibrahim, the Pasir Mas MP, told reporters on Saturday.

“I confirm that the Perkasa president said ‘burn the Bible’ but he did not mean the real Bible written in English. He meant Bibles in Malay which use the word Allah and are written in Jawi,” claimed Syed Hasan.

He also insisted that rather than urging Muslims to seize and burn the Malay Bibles, Ibrahim had only urged Muslims to burn the Bibles upon receiving them.

“The Perkasa president said during the Jan 19 press conference that whoever received the Bible in Malay with the word Allah and Jawi writing from someone, should just burn it.

He also flayed civil liberties lawyer Syahredzan Johan for being “selective” over the issue when commenting on it.

Yesterday, Syahredzan had told FMT that Ibrahim’s “hate speech” may have contravened Sections 298 and 505 of the Penal Code.

Section 298 states that it is an offence to utter words that deliberately wound religious feelings. If found guilty, an offender can be imprisoned for a year, or fined or both.

Section 505 states that it is an offence to make statements that that are conducing public mischief. Those found guilty under this section can be imprisoned for a span of two years, fined or both.

“Thank you to Syahredzan Johan who informed the public through FMT that the highest action can be taken against the Perkasa president for his statement over the Bible burning issue under Sections 298 and 505,” said Syed Hasan.

“Doesn’t it already mention in the Federal Constitution that we are prohibited from spreading other religion to Muslims in this country? Why is Shahredzan selective over this issue?” said Syed Hasan.

Article 11(4) of the Federal Constitution states that federal law may control or restrict the propagation of any religious doctrine or belief among Muslims.

Meanwhile, Perkasa lashed out at MIC director of strategy S Vell Paari for urging the government to take criminal action against the group lest Barisan Nasional lose the non-Malay votes.

“What kind of strategy director does MIC have? To Vell Paari, Perkasa would like to remind him that MIC also needs Malay votes,” said Syed Hasan.

He reminded Vell Paari that Perkasa’s membership was 95% Muslim and Malay, and said that every State Legislative Assembly was made up of over 1,000 people.

“Don’t make us amend the oath we uttered during the Perkasa general assembly on Dec 15 in which we swore to support all BN candidates, including MIC and MCA,” warned Syed Hasan.

Yesterday, Vell Paari had said “to see [Ibrahim] making such provocative remarks in the presence of former premier Dr Mahathir Mohamad is not going to look good on BN, especially with elections just around the corner”.

But Syed Hasan stressed that Mahathir’s presence was not related to Ibrahim’s statement.

“Do not associate Mahathir with the Perkasa president’s statement,” said Syed Hasan.

He added that if Vell Paari were truly a Malaysian, the latter would slam those who tried to propagate other religions to Muslims. (FMT)
Posted by sabahkini.net at 02:54