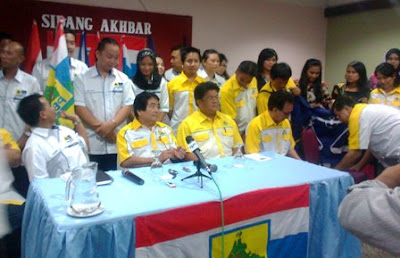 SEPANGGAR....PBRS President Joseph Kurup who is eyeing the Sepanggar parliamentary seat is aiming to position his son for federal level politics.

Arthur is expected to contest the Pensiangan seat for Barisan Nasional in the coming general election.

Since early last year, Kurup, the Federal Natural Resources and Environment Deputy Minister, has been touring his constituency introducing his son to the residents.

During the party’s congress last month, Arthur was unanimously made the party Youth chief, a post which automatically makes him one of PBRS’ Vice-Presidents.

Another hint that the older Kurup is not contesting in Pensiangan was his announcement of PBRS staking a claim to the Sepanggar seat in the 13th general election for the BN.

That seat is now held by the opposition Sabah Progressive Party (SAPP). The incumbent MP is Eric Majimbun.

PBRS leaders contacted have indicated that should BN leadership give the nod to PBRS in Sepanggar, the candidate will be Kurup.

Kurup is said to be hesitant about defending his Pensiangan seat because of the controversial way it was handed to him in the 2008 general election.

Kurup, a lawyer by training, won the seat without a contest when all other candidates were disqualified after the returning officer rejected their nomination papers allegedly for filing them after the nomination period had ended.

One of the rejected candidates, Danny Anthony Andipai of PKR, took the matter to court claiming that he had duly filed his papers on time but was disqualified on the orders of Kurup.

The Kota Kinabalu Election Court ruled in favour of Andipai and declared the Pensiangan seat vacant.

However, Kurup filed an appeal to the Federal Court which overruled the decision and declared him the duly elected MP.

Pensiangan has since turned out to be a hot seat and is being claimed by Umno.

There are two state assembly seats – Sook and Nabawan – in this parliamentary constituency. Sook is held by PBRS deputy president Ellron Angin and Nabawan, was won by Bobbey Ah Fang Chuan of Upko.

Kurup, a former Sabah deputy chief minister, contested and won the Sook seat in 2004 for the BN when he garnered 3,973 votes against 3,578 obtained by Jeffrey Kitingan who contested as an independent. He won by a 395-vote majority. Another independent candidate Yapilin Nawawi polled 252 votes.

Apart from following Kurup on his political rounds for the last few months, Arthur, 31, is said to be gaining popularity among the people of Pensiangan.

Arthur was educated in Australia and obtained his Master of Laws from Queensland’s Bond University. He was admitted to the Sabah Bar in May last year.

PBRS was formed by disaffected members of PBS on March 11, 1994. The party was officially accepted as one of the component parties in the ruling BN coalition on June 10, 1994. (FMT)
Posted by sabahkini.net at 09:35