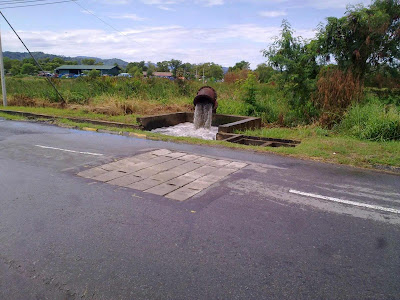 A COMPLAINT was received by the KK MP office on the bad condition arising with the Inanam Sewerage Stabilization Lagoons. The complainant also an engineer said the sewerage lagoons are not receiving attention and regular maintenance by the authorities like DBKK and JKR.

The complainant told the KK MP Hiew King Cheu is an E-mail that he is a resident in Kingfisher Park 2 and he saw that the ponds are overgrown with dense vegetation and this can be seen thriving in all the Anaerobic Ponds and a lesser extent in the Facultative and Maturation Ponds. Trees are a common sight alongside the pond embankments.

A huge sump was constructed next to the access road to receive pumped raw sewage collected from the whole Kota Kinabalu area before entering the ponds. The dirty sewage water usually splashed on to the passing cars during peak hour pumping. The DBKK workers quarters are usually flooded if there is an overflow.

KK MP Hiew said this calls for immediate attention by the authorities because this is matter concerning public health and it is an environmental hazard. He said he had made complaint personally last year about the overflowing of raw sewage water to the near by land causing serious pollution problems and the matter was attended to and put right. Now further problems had come up due to the overgrown vegetations in the ponds, and this will definitely create problems in the function of the ponds, and may cause overflowing and pollution to the place. This if happens, the people living in Kingfisher Park and the surrounding areas will be affected.

The Kota Kinabalu Master Sewerage Scheme when finally completed and connected to these ponds, we shall see big problem arising because these ponds are not capable of handling that much of sewage water from the whole Kota Kinabalu City.

It is a known fact that 70% of the KK sewage water is uncounted for, and most of this has found its way into the open drain or fields. The level of pollution is horrible and sadly this was not noticed by the people. Our land and sea are polluted and contamination is rampant. This is a serious matter and what are our authorities and especially the Department of Environment (DOE) doing? It seems that they knew about this and yet do nothing.

It is a must that the authorities should immediately do something to clear the matter and keep regular maintenance schedule. (DAP Media)