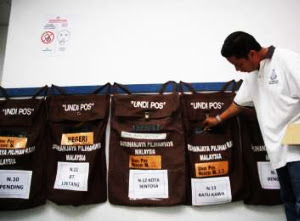 LOGIC....DAP also questioned the logic of giving overseas Malaysian voters only one day to cast their postal votes at their respective embassies.

KUALA LUMPUR: DAP has urged the Election Commission (EC) to remove a newly introduced clause which requires Malaysians living abroad to return home for 'a total of 30 days within five years' as a pre-requisite to qualify as a postal voter.

Commenting on the EC’s latest announcement, Loke said the “new” clause would deny many Malaysians abroad a fair chance to vote in the general election.

“It is a new condition imposed by the EC. The former Parliamentary Select Committee [PSC] on electoral reforms only agreed on the condition for applicants to return to Malaysia once in five years. There was no specific length [days] stated,“ said.

DAP election strategist Ong Kian Ming, who was also present at the press conference, pointed out that the new condition would only add to the EC’s workload.

He said the process would create a massive hassle as the EC would have to check the Immigration Department’s record of each applicant before approving.

Under new postal voting guidelines, Malaysians living overseas must first be a registered voter and fulfil the 30-day condition to be eligible to become postal voter.

The same, however, does not apply to Malaysians living in Southern Thailand, Singapore, Brunei and Kalimantan, Indonesia.

These Malaysians are not eligible to register as overseas voters and must return home to cast their ballots. This is due to the proximity of these countries to Malaysia.

The guidelines also further stated that postal voters had only one day to cast their votes at their respective embassies.

The ballots would then be collected and posted to the EC headquarters in Putrajaya where they will be sorted according to constituencies.

According to a World Bank Report, there are about 100,000 Malaysians living and working abroad.

Loke, who is also the Rasah MP, said the one day time-frame for voters is “ridiculous” because it would create logistical problems.

“For example, there might be only two or three embassies in the United States at the coastal cities, but some Malaysians are living in the interior areas. They have to take flight to come to the embassies.

“Are you expecting all Malaysian to come to the embassy on the same day? Even if they come, can the embassy cope with the high number of voters?

“Even in some army camps, there are cases where they were given two or three days to vote,” he said, urging the same to be applied to overseas voters.

The party also demanded that the EC allow political parties to observe the process of issuing and sorting out ballots at embassies to avoid elements of fraud. (FMT)
Posted by sabahkini.net at 23:47