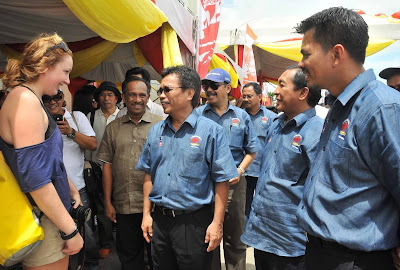 TAWAU : All quarters, including the opposition, should welcome the setting up the Royal Commission of Inquiry (RCI) on illegal immigrants in Sabah, said Umno Vice-President Datuk Seri Mohd Shafie Apdal.

He said the Government had taken a bold step to set up the RCI following hue and cry over problems related to citizenship and immigrants in Sabah raised by many quarters, including the opposition.

"After RCI was formed, opposition parties are against it, instead of welcoming it. Certainly, RCI can have positive and negative impacts.

In the course of investigations, definitely we have pros and cons.

"But the most important thing is the firmness and courage displayed by our leaders, particularly Datuk Seri Najib Tun Razak, in setting up RCI.

"Even though we know this is an election season and that RCI might be turned into an issue. But we are after solution so that there will be no more confusion and manipulation by unscrupulous people," he told reporters after opening the Tun Mustapha Mara Junior Science Colleges, here, Saturday.

"What happened in Sabah is not unusual. It also occurs in the United Kingdom and the United States. What is important, as a sovereign country, the Government is taking the responsibility to strengthen the administration so that it will not cause hardship to future generations," he said.

Shafie, who is also Rural and Regional Development Minister, said the RCI would submit its findings to the authorities before they would be tabled in Parliament to resolve the quagmire.

Hence, Shafie advised all quarters to let the RCI perform its tasks, instead of criticising and blaming certain people.

Meanwhile, Sabah Suluk Ethnic Cluster Association (Press) Secretary, Mohd Zaki Harry Susanto, urged the community in the State to appreciate the Government's efforts in setting up the RCI to address the illegal immigration problem in Sabah.

He said Sabah does not belong to any absolute party but to Malaysian citizens and such awareness should be present in each person so that prosperity could be enjoyed for generations.

The RCI, he added, should also be given enough space to carry out its tasks to meet the terms set.

The community was also asked not to be judgmental because the RCI's task is still not complete.

"In this case, we should appreciate the Government's sincerity and transparency in dealing with the illegal immigrant problem in Sabah and to not politicise the good work.

"As a Sabahan, I urge all parties to not exploit the Government's honesty by raising sensitive issues relating to the RCI as it could affect harmony in the State," he said.
Posted by sabahkini.net at 14:18