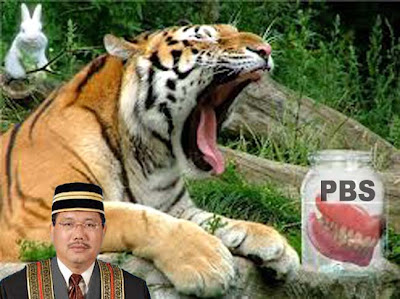 “And for Mositun to make this desperate-sounding statement just before the GE13 is telling us that all is not well for the party’s relationship with Umno, its father party which Mositun indirectly accuses of walloping all the electoral seats in Papar in Kimanis,” Jambun said.

“He clearly lamented that ‘all the elected representatives in Papar and Kimanis are from Umno’ then proceeded to name the six parliamentary and state assembly areas and their representatives.

He should have said this injustice has been going on from the beginning.

Jambun said it was a serious admission by Mositun that “it was not an easy matter to resolve but it is one that must be treated seriously by the BN leadership.”

“This can be understood only one way, that the problem of injustice against Sabah BN components like PBS is actually almost impossible to resolve with Umno attitude,” Jambun added.

“He even admitted that there is already a longstanding ‘perception of the (rakyat) that there is no fairness within the BN, that a certain party/parties (he meant Umno) monopolising the posts of OKK, Ketua-Ketua Kampung, CDO, JKKK (heads), etc.’

“Mositun conclude with another indirect admission, that many of the people feel marginalised or discriminated against in the distribution of development projects. In the final count, PBS is almost totally helpless and toothless as a BN component, unable to do anything in the face of discrimination in matters of political appointments against its own divisional leaders and discrimination against the KDMs.

“It is such a shame that a party which Mositun claims to have a wise leader (Pairin) would go on for more than a decade to tolerate such a treatment. I can almost feel pity for Mositun who has to heap praises for Umno and yet admit PBS’ frustration in the coalition.

“It is also amazing that he repeatedly said PBS still needed Pairin’s leadership and accused certain groups for inciting the KDM youths to demand that Pairin stepped down. Doesn’t he know that it was Pairin himself who announced that he wants to retire after GE13? Doesn’t he know that it is general knowledge in the interior today that Pairin most likely won’t recontest in Keningau?

“If Mositun really believes PBS still needs Pairin’s leadership, he should appeal to Pairin to stay on, and not attack the KDM youths for calling for Pairin’s retirement.

Mositun accused these youths for being ignorant of history, and ‘they only knew Pairin and PBS from newspapers, misinformed bloggers, opposition propaganda.’ But whose fault is that? Again Mositun made another important and serious admission – admission that Pairin and PBS have long lost touch with the younger generation!

“They are so far removed from the rakyat that the KDM youths of today get to know Pairin “only from newspapers’? Is he saying Pairin seldom turun padang ? What Mositun refuses to admit is that this is no longer 1985.

He cannot force the youths to appreciate Pairin based on glories of the past because the youths are demanding new leadership based on today’s needs and high visions of the future!

This is now the 21st century which is filled up with new ideas, new visions which demand new approaches to missions. And these are mission approaches the PBS leaders seem to be blind to.

“PBS is obsolete for many reasons, mainly that the world has moved on and PBS refuses to address the new political realities in which youths want new leadership dynamics.

PBS has disappointed the people by becoming bedfellows of Umno, which the people see as the neo-colonializer of Sabah , so PBS is also guilty by association, i.e. for being a stooge and a stooge which openly admits it is being mistreated as a component.”

Jambun concluded by pointing out that Mositun cannot defend Pairin by asking for support based on Pairin’s past struggle. He said what Pairin should do today to give the new generation of KDMs the energy of a strong, courageous and independent leadership that promises a better, stronger and a more autonomous future.

“But Pairin and PBS cannot give this as long as it is in BN, because as Mositun has openly admitted, PBS is helpless and toothless where it is now!

"It is just unfortunate for PBS that the promises of the future is being made through brave and selfless struggle by the opposition like STAR , a party that has pioneered new ideas which is firing up the imagination and excitement of the new generation of not just KDMs but all Sabahans, young and old,” he said.