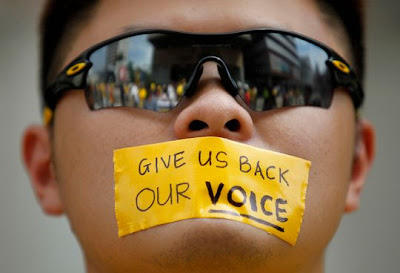 DEMOKRASI Sabah (DESAH) today announced that it is organizing a forum tentatively to be held on 17 February, 2013. The proposed venue is the Star City Conference Centre.

The title of the Forum is:
“Malaysian Voters – What We Expect From The Incoming Government”

The Forum will be moderated by Tan Sri Simon Sipaun, the Chairman of DESAH.

This Forum will be of a different kind - Leaders and representatives of all political parties will be invited – both from the ruling Barisan National and Opposition but will not be speaking but may be asked to answer queries or give explanations on issues. The speakers will all be representatives of the rakyat.

The Forum will be open to all citizens and seating will be on a first come first served basis. Further details and verification on date, time and venue will be released as they are confirmed.

(Footnote: DESAH is a civil society group formed in 2012 to campaign for and encourage one-to-one contests in the coming general election. It had organized several debates between parties with the aim of reaching consensus on one-to-one contests. This Forum may be the last of its efforts and hopes the desires and aspirations of the citizens can be fulfilled by the incoming government.)
Posted by sabahkini.net at 03:21