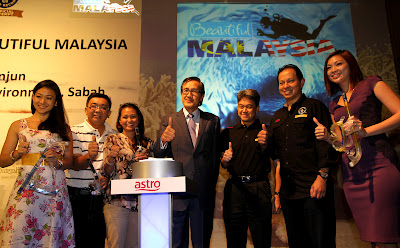 While many Sabahans will welcome this statement because of it's "significant billion ringgit mark”; the 1.1% increase in 2012 as reported by the minister is still way below par.

The growth of 1.1% shows that the government still lacks the x-factor in making Sabah a good tourism destination therefore 1.1% is just unsatisfactory.

Numerous press statements and endorsements made over the years by the ministry spokespersons as well as the industry players boasting that Sabah can become the "next Bali" or the "biggest destination in south east asia" or "can compete with the best destinations". However these statements have fall short.

Therefore, the public needs an explanation from the minister on why the achievement for 2012 is only 1.1% closer to those "bold statements".

He must also inform the public how much has the government has spent taxpayers money to achieve only 1.1% growth in 2012.

The Minister must also explain to the public which specific sector or sub-sector contributed to the 1.1% growth. Was it from the retailing, f&b, tour, culture & art, events, clubbing?

Sabahans have the right to know where our tourism industry is heading to and why there are rooms for improvements because society is no longer ignorant of economics and have begun to demand transparency and accountability. Therefore, Masidi must set an example of good practices on behalf of the government and explain the luckstre growth.

For us in KDMFM or Kadazan Dusun Music & Film Activist Association, we want a formal explanation including statistics from Masidi and his Ministry on "how much local contents such as music albums, telemovies & films were promoted and retailed" to the 2.875 million tourists in 2012.

We want to know what effective practices was carried out by the ministry to boost creative economics of artisans and producers in 2011-2012. Many artisans still do not see why the government cannot create policies, legislations and developments for creative culture economics.

As a cultural creative industry activist association, we want to the state government to firstly recognize our mission objectives, visions and production expertise before we propose to work with the state government particularly the tourism ministry to help Sabah achieve more that only 1.1% growth through our filming and tv programs slots.

To set an example of good practices; KDMFM wishes to recognize the good practices of Radio Television Malaysia (RTM) in finding the solutions between local producers & filmmakers with the government run stations TV1,TV2 and TVi.

This year 2013, RTM has allocated more than 60 television programs for Sabahan content creators ranging from Drama, Game shows, Music TV, Documentaries, Mini Series, Infotainment and Telemovies. Finas has also commissioned "Nationalism Film" grants for Sabah filmmakers. These contents can and will directly and indirectly impact Tourism in Sabah, so why can't the state create policies, legislations and development opportunities for Sabah creative players?