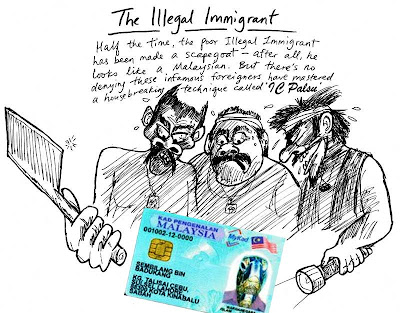 THE ILLEGAL immigrant issues are now the center of discussions and grapevines nationwide for the upcoming 13th general elections since the issues have affected the results of the past general elections in Malaysia, particularly in Sabah.

Looking back in history, although Filipino immigrants in Sabah had ancestral links dated back to the period before the independence of Malaysia, the major issue on the Malaysian identity card given to them had dated back to the era of Tun Mustapha as the third chief minister of Sabah. In the 1970’s, Filipino refugees from Mindanao began arriving in Sabah as a result of the Moro insurgency taking place in the region.

These refugees had arrived in droves and more than 73,000 Filipinos were granted refugees status from 1976 to 1985. Of the 73,000 Filipino refugees in Sabah, 33,019 had been issued with the refugee card (IMM13) according to Moktar Yassin, the secretary of Home Affairs and Research office in the Sabah Chief Minister’s Department (JKM).

A total of about 325,000 illegal immigrants were detected and documented through census between 1987 and 1992 according to Abdul Ja’afar Alip, former head of settlement unit in the Chief Minister’s Department.

Sabah population leapt in 1991. Population census was carried out in 1991 showed that Sabah’s demography had changed drastically with huge increase in its population according Prof Rangit Singh. The census reported the population of Sabah to be 1.7 million and out of this total 423,000 non citizen and who are these non-citizens were not disclosed in the census.

The 127,949 identity cards issued in the state from 1979 to 1996 were believed to be questionable according to Roslan Alias, the head of the National Registration Department (NRD) Sabah and Sarawak Special Unit assistant, and of the total 91,656 were cancelled after their issuance was deemed “unsystematic”.

During the January 2013 RCI hearing and as reported in the newspaper, Ramli Kamarudin, former Director of National Registration Department, said immigrants were recruited as phantom voters during the 1994 state election.

According to him, he was instructed to issue temporary identity card (IC) receipt to immigrants to allow them to vote in the election and he said the instruction came directly from Deputy Director General of NRD and the then Deputy Home Affairs Minister Megat Junid.

He said between 200 and 400 of these temporary receipts were used by non-citizens to vote in each of the five or six constituencies involved. He explained that the temporary documents has an expiry period for only three month and no application for ICs were filed prior to their issuance and therefore they could not be used for issuance of IC.

He disclosed that the state Election Commission Director, Datuk Wan Ahmad Wan Omar had handed to NRD personnel a name list of 16,000 names and the Director of NRD, Ramli Kamarudin who verbally instructed us to do the changes to those in possession of the JPN1/9 and JPN1/11 documents (JPN1/9 is the Temporary Receipt issued for application of an identity card while JPN1/11 is issued for a lost identity card).

Filipino refugees given IC met all requirements said former Prime Minister Tun Dr Mahathir Mohamad. He admitted that during his tenure he had given citizenship to Filipino refugees in Sabah who were able to meet all the requirements and that these identity cards were handed out legally, but he did not know if the former Deputy Home Affairs Minister Tan Sri Magat Junid Megat Ayub had ordered them to be issued on purpose ahead of the state election.

On January 17, 2013, Prime Minister Datuk Seri Najib Razak said that there is nothing wrong in handing out citizenships to foreigners as long as the law is followed, amid revelations by former government officials that identity cards had been given to illegal immigrants to vote in the Sabah state election in 1994.

The Election Commission (EC) had instructed the National Registration Department (NRD) to change the names of 16,000 immigrants in Sabah and to give them identity cards.

Former Sabah NRD deputy director Mohd Nasir Sugip, who worked in Sabah NRD from 1992 to 1994, told the RCI that the then-Sabah EC director, Datuk Wan Ahmad Wan Yusof, had ordered Sabah NRD to change the names of Indonesian and Filipino immigrants to increase the number of Muslim voters in Sabah.

These illegal immigrants are becoming Malaysian as “New Bumiputras” with native rights especially those who are Muslims. The issues have now come to light and are being discussed in the open by Malaysians all over the country. Citizenship and ownership of Mykad is the sovereign right of all Malaysians.

There are so many original native Malaysians especially in the rural remote part of Sabah and Sarawak who have birth certificates, no identity cards (I/C) or Mykad until today. They are poor rural folks and they cannot afford to travel the rough terrains to go to the towns or city to register themselves for their Mycard.

For a native Malaysian to get a Mykad, he has to get the card clinic, birth certificate, parent’s marriage certificate and their Mykads, village head certification, etc before he can get near to his Mykad. What is the government doing about this? Why is it so easy for illegal immigrants without any proper document to become a “New Bumiputras”?

These New Bumiputras have been given not only the citizens’ blue identity cards (I/C) or Mykads but also the right to vote in elections and to own land including native title land. We cannot blame the illegal immigrants or Penduduk Tanpa Izin (PTI) because they were given the right to have Mykad by the Malaysian BN government and also the right to vote (with incentives) in elections. Any body in their right mind would gladly accept citizenship and voting rights for free plus “goodies”.

Malaysians are now smacked in the middle of this very big controversy dangerously close to the 13th General Elections. Is the government really doing anything or is this another “lip service” like the other past RCIs? The saying goes “Power corrupts, and absolute power corrupts absolutely”.