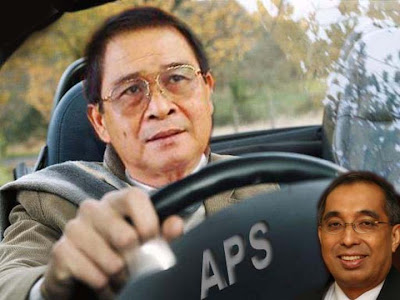 THE MAGNITUDE of the illegal problem today in Sabah is as a result from the well planned program by the UMNO-led BN government since the day Mahathir took power.

The problem had been raised by the people of Sabah since the eighties but the Federal government had taken a hard line position of denial. The setting up of the RCI by the government which it reluctantly but forced to succumb after facing mounting pressure from the people, Mahathir was forced to eventually admit that he was indeed responsible for the issuance of ICs to the illegal immigrant in Sabah.

Indeed, Mahathir stand accused of not only committing an act of betrayal to the people of Sabah but committed treason to the people and country for failing to protect the sovereignty of Sabah within Malaysia by selling giving citizenship to a large numberof foreigners.

When his great misdeed had eventually been exposed he scrambles for excuses and justification for his hideous act.  He got the gut to say that his action is justified by saying that he acted according to the law.

The facts had now been revealed through the hearing of the RCI and now the federal government is duty bound to review all the ICs given illegally to prove whether Mahathir had acted according to the law. By saying that Tunku Abdul Rahman had acted worse than him in granting million of foreigners citizenship is admission on the part of Mahathir that his action was wrong.

However he had erred in his analogy because the granting of migrant population on the time of independence was the agreement between the various races then based on the social contract that the three major races have agreed upon. Mahathir forgot that his father was also a beneficiary to the agreement. Mahathir should be brought to a constitutional trial for his grievous misdeed to the people and country.

In relation to this I would like to ask Datuk Salleh Said  Keruak as to  why he did not challenge Mahathir to appear before the RCI after his admission to his part in issuing ICs to the illegal immigrant in Sabah.

By not doing so I dare to say that he condones all what Mahathir had done to the great injury to the people of Sabah. I also would like to ask Datuk Salleh what he had done during his tenure as the Chief Minister of Sabah to solve the illegal immigrant problem.

Now that Datuk Seri Anwar had declared that he is ready to appear before  the RCI I would like to challenge Salleh and all the former chief ministers of Sabah  including the present chief minister to appear before the RCI to give testimony. All of them are duty bound to help solve the problem. Those who refuse to do so will imply that they are cohort to Mahathir misdeed.