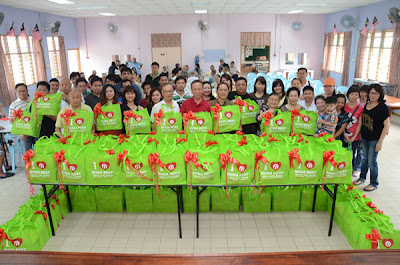 HOSPITALITY.....Liew (seventh left) and Koh (eighth left) in a group photo with the staff and elderly folks.

KOTA KINABALU: Businessman and philanthropist Frankie Liew led around 60 of his staff to visit three charitable organizations to distribute goodie bags and ang pows to the unfortunate members of the society in conjunction with the coming Chinese New Year celebration.

The group started off with Sri Pritchard Old Folks Home, Kinarut in the morning, followed by Sabah Cheshire Home and Yayasan 1 Suria later in the afternoon.

At the old folks home, Liew said he wanted to bring the spirit of Chinese New Year to the elderly and to give them the necessary daily items such as biscuits, milk, oat, and prunes.

“We also give them ang pows for them to buy whatever they want to eat during Chinese New Year.”

Liew added that his companies had also contacted the charitable organizations prior to the visits to determine the items they needed.

In previous years, his companies had bought television, washing machine, washing detergent and other things.

Some 73 elderly folks at Sri Pritchard were all smiles when they were presented with ang pows from Liew, as well as representative from Kian Teck Sdn Bhd and Richard Lee who went along with the group.

At Yayasan 1 Suria, Liew not only made a donation to the foundation, but also brought along KFC as treats for the children.

“As Chinese New Year is approaching, we hope we can bring joy and cheer to the charitable homes and make the unfortunate feel that they are cared for.”