SABAH RCI: WHAT NEXT? 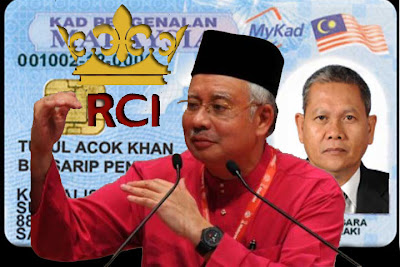 FORMER Prime Minister Mahathir Mohamad finally admitted — in the face of overwhelming evidence — that he granted citizenship to the illegal immigrants who have flooded Sabah, but quickly added that the citizenship was granted legally.

He said: “Many of them in Sabah were not there for a day or two, but 20 or 30 years and can speak Malay. They have the right to be citizens”.

Is that all there is to the infamous 'Project M' (M stands for Mahathir) that has brought untold miseries to Sabahans: the mere granting of citizenship to qualified immigrants in the normal legal way?

To get to the truth, let us hear some top officials of the Sabah National Registration Department (NRD) who gave evidence to the Royal Commission of Inquiry looking into the population explosion of Sabah.

Sabah NRD assistant registrar Kee Dzulkifly Kee Abd Jalil said the special unit he was working in, illegally issued some 100,000 blue identity cards (IC) to the immigrants (blue cards are meant for citizens only), in addition to issuing 200,000 letters of approval for birth certificate for the children of immigrants. With these approval letters, they would get their birth certificates from the hospitals or district offices.  These immigrants, who are all Muslims, are mainly from southern Philippines and Indonesia.

Kee Dzulkifly, together with some of his fellow officers who also gave evidence collaborating Kee Dzulkifly’s evidence, was subsequently detained under the Internal Security Act (ISA) for two years from 1995 to 1997, for engaging in these illegal activities.

Tamparuli NRD Chief Yakup Damsah said that upon instruction from then Sabah NRD chief Abdul Rauf Sani, he and his colleagues were flown from Sabah to Kuala Lumpur, where they operated a clandestine operation in the house of Mahathir’s then political secretary Abdul Aziz Shamsuddin at Kampung Pandan to illegally issue blue ICs to immigrants.

Yakup said the purpose of the operation was to boost Muslims voters and to ensure they vote for Umno in the Sabah state election. His group issued 40,000 blue ICs within a month. Yakup was subsequently detained under the ISA for his illegal act.

Sabah NRD Chief Ramli Kamaruddin, who succeeded Abdul Rauf, said that two weeks before the 1994 Sabah state election, he met then deputy home minister Megat Junid Megat Ayub (then home minister was Mahathir) at Hyatt Hotel in Kota Kinabalu, where he was instructed to issue temporary IC receipts to immigrants.

These receipts, in the names of voters who never voted, would enable the immigrants to vote on polling day, so as to ensure a Barisan Nasional (BN) victory. Also present at the hotel was Osu Sukam, who later became Sabah chief minister in 1999. Ramli Kamaruddin was also detained under ISA for two years from 1995.

Sabah NRD deputy director Mohd Nasir Sugip testified that the department carried out the clandestine “Ops Durian Burok” from 1992 to 1995 under instruction from the state Election Commission (EC) to provide unqualified immigrants with blue ICs so that they could vote in an election.

With the new ICs issued in accordance with the details provided by the EC, these Filipino and Indonesian Muslims were then planted as voters in strategic constituencies (classified as ‘black’ or ‘grey’ for BN) across Sabah to help BN win in elections.

At one time, Sabah EC director Wan Ahmad Wan Yusof handed over a list of 16,000 names and asked for these to be converted into ‘Bumiputra Islam” voters. Mohd Nasir was later detained under the ISA.

All this evidence was presented to the Royal Commission on January 16, the third day of the hearings; whereas Mahathir claimed his innocence on the next day, January 17.

Does it not boggle the mind that in the face of such incontrovertible evidence of this massive illegal operation, Mahathir would still deny its existence?

What gave him the courage to do so, if not for the fact that the Royal

Commission’s proceedings have virtually been blacked out by the mainstream media, while his statement of defence would be given prominence?

Despite such connivance from the mainstream media and Mahathir’s brazen denials, there is no way that such staggering breach of law can be buried in this Internet age of ubiquitous information.

Equally impossible to deny is Mahathir’s link to these acts of treason.

The two key political leaders featured in the evidence — Aziz Shamsuddin and Megat Junid — were Mahathir’s closest confidantes, who were also well known for their roles as henchmen to execute some of his more unsavoury schemes.

At their level of political influence and status, these two henchmen would have neither the courage nor the reason to embark on such a bold venture of high treason that could easily have led their journey to the gallows, without the protection of the highest political leadership.

It is as clear as daylight that these two political minions were only carrying out the wishes of their political boss.

Project M is unparalleled in modern history in that it is a clandestine operation that has succeeded in robbing the sovereign rights of a people by massive infusion of illegal immigrants and pervasive contamination of the electoral roll with illegal voters (known as the phantom voters).

The success of Project M has ensured Umno’s hegemony in Sabah for almost two decades. And the original Sabahans will continue to be subjected to such rule unless the illegal immigrants and phantom voters menace is resolved.

What is even more alarming is that the phantom voter cancer continues to grow right up to this day, not only in Sabah, but there is ample evidence that its malignancy has been spreading in Peninsula Malaysia, as exemplified by the thousands of dubious registered voters that surface continually, particularly in the state of Selangor.

The latest evidence was uncovered by a survey carried out by the Selangor government. In a house-to-house check on the half a million newly registered voters, 135,000 of them could not be traced, for which the EC has not given any valid answer.

In fact, our greatest problem is our EC, which has unabashedly acted as a political arm of Umno.

Take the case of the explosive expose’ uncovered by the Sabah RCI.  In any democracy, the election commission would have immediately swung into emergency action, and in conjunction with other agencies such as the NRD, police and attorney general’s chamber, would seek out the criminals and rectify the huge damage to restore integrity and public confidence to the electoral system.

But not our EC. The latter has chosen not to react on the lame excuse that any comment would be ‘subjudice’ and any action would also be premature, as the RCI has not completed its findings.

The same deaf and dumb tactic has also been adopted by Prime Minister Najib Razak and the component parties of Barisan Nasional. EC and BN’s strategy seems to be: do nothing until the next election which will be held in probably two months’ time. (Parliament stands dissolved on April 28, and polling within 60 days thereafter.)

And opposition alliance Pakatan Rakyat and civil society will have to decide whether to stage another mass rally, both to force some urgent and basic electoral reforms including cleansing of electoral roll, as well as to gain political capital by swinging the middle ground further towards them.

Whatever the decision on the mass rally, the opposition will certainly leave no stone unturned to publicise the moral and political bankruptcy of the incumbent political power in resorting to means most foul at perils of destroying our democracy so as to cling on to power.

Thus, the Sabah RCI is turning out to be a last minute gift to the opposition after all, whatever its findings. (TMI)