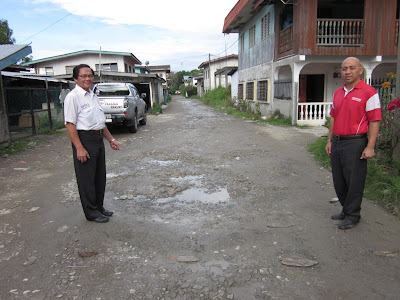 The residents of Kampang Kalansanan had complaint to them about the bad condition of the Kalansanan Road.  The road is narrow and full of pothole and they are made various complaints to their elected representative as well as to the authorities concerned but up to date there is no action has been taken.

Edward said that the irony is there is a signboard erected at the main entrance of the road in Bahasa Malayasia stating that 'Menaik Taraf Jalan Kg. Kalansanan' (upgrading of the Kalansanan Road).  When asked the residents, they said the signboard was erected sometime last year but until now there is no sign of any work has commented.

The residents are very angry and disappointed that the road condition has existed for about a decade but the authority never bothered to repair it.   The residents they had suffered a lot as during rainy season the pothole will fill with water and very hard for them to avoid hitting the potholes especially at night and this has caused a lot of damages to their vehicles and during dry season they had to put up with a lot of dust going to their house and has affected their health.

Edward wondered whether the signboard has been erected as gimmick just to fool the residents there so that they will vote BN in the forthcoming 13th General Election which is around the corner.  He noticed that a big lorries also coming in out of this road and that has one way or another contributed to the bad condition of the road.

So Edward urges the authority concerned to do the upgrading of this road as on the signboard immediately. (DAP Media)