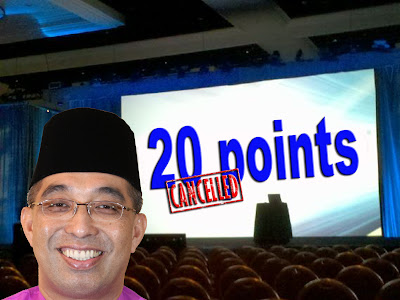 KOTA KINABALU: State Assembly Speaker Datuk Seri Salleh Tun Said said the 20 Points agreement on Sabah's safeguards for agreeing to Malaysia's formation is no longer valid because it is already part of the Malaysian Constitution.

He said because of the opposition's grip on the online platform, the issue has been used to garner support from the people, when in fact the agreement doesn't exist anymore.

"We need to convince the young that such agreement doesn't exist anymore. We can't be swayed by the opposition as if the agreement is still valid.

"The struggle of Sabah is its development. We must also convince them that the Barisan Nasional government is fighting the real struggles of the State," he said, when launching the Cyber Trooper Workshop at 1Borneo.

Salleh, who is also Sabah Umno deputy chief, said the opposition also claimed that the leaders here are merely tools of the Federal Government and portrayed themselves as the heroes of the State.

"This is why they keep on winning the cyber warfare.

So we need to raise such issue that is relevant to the people here," he added.

He said in reality cyber warfare is a war to win the minds of the people and that the BN needs to go all out and win the war.

"Now the world has changed and we have to change our objectives.

And today our war is different and our views have become different.

"With all this technological advancement, the opposition have used other methods to influence the community. We see from previous elections, they have used various new methods to tarnish the image of the BN," he said.

Citing an example Salleh said during the late 90s (former Deputy Prime Minister) Datuk Seri Anwar Ibrahim purposely made it obvious to the public about his black eye and openly claimed he was roughed up by the police.

"He did this purposely to fool the people into believing he was injured by the police," he said.

Salleh, however, said the war is still the same but its methods have changed, largely done online and for that reason the Cyber Troopers have been formed.

He hoped the Cyber Troopers will help correct the false allegations made by the opposition against the Barisan Nasional government.

"We must win this war and we can't fail. Otherwise, the Barisan Nasional will risk losing.

"The opposition have influenced the youth until they have become determined to see the downfall of the Government," said Salleh, adding this has also bred youths making street demonstrations a trend.

To win the cyber warfare, Salleh said planning is important and that 50 per cent of wars are won through planning.

He also advised them to avoid self-indulgence and arguing only between each other but instead go all out and correct misconceptions in the Internet.

"We need to keep everyone informed with correct and accurate information. And if possible we must counter the allegations of the opposition online."

Meanwhile, 83 youth from Umno and component parties are participating in the three-day workshop which ends Sunday (today).

The 20 Points as agreed by the political parties then were about matters which the people of North Borneo felt deeply about i.e. - no State religion, use of English as official language, new Federal Constitution and not the Malayan Constitution with amendments. Strong state control over Immigration, land, forests and local govt, no right of secession and Borneonisation, among others.

However, many of them were annuled during the Usno era. (DE)
Posted by sabahkini.net at 15:42