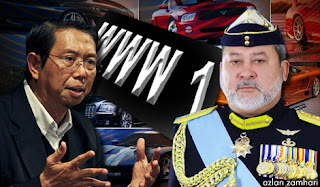 JOHOR police have set up a special team to probe a statement by former Perak menteri besar Datuk Seri Mohamad Nizar Jamaluddin on Sultan of Johor's bid for the registration plate WWW 1.

Johor police chief Datuk Mohd Mokhtar Mohd Shariff said it has received eight reports on the matter and investigation will be conducted under the Sedition Act.

"Police will complete the investigation papers after examining the reports and will forward it to the deputy public prosecutor," he said when contacted by Bernama Wednesday.

Mohd Mokhtar advised the people to respect the laws of this country and refrain from making baseless statements.

On Tuesday, Nizar via Twitter said the Sultan of Johor had misused public funds when bidding the vehicle registration plate WWW 1 for RM520,000.

Johor Umno Youth chief Mohd Fadil Muskon today urged police and Malaysian Communications and Multimedia Commission to act against Nizar or anyone who supported his statement on Twitter, Facebook or any other media.

"Johor Umno Youth consider this matter as defamatory and rude to the Sultan of Johor. This is provoking the people to hate the royal institution," he said after making a report at Central Police Station Wednesday.