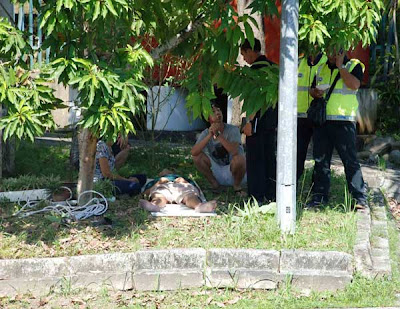 BODY.....Lin's grieving family members at the scene before his body was taken by police to the hospital.

KOTA KINABALU: A 20-year-old man and a 53-year-old man were found hanged in separate apparent suicides in Inanam and Tuaran. The young man, identified as Ronny Edward Simon, was found hanged with a computer cable from the ceiling of his bedroom at Kampung Kiang Lama, Jalan Kianbalang, Inanam on Monday.

Before the discovery of his death by his family members around 5.30pm, Ronny was believed to have had an argument with his girlfriend.

His body, clad in a T-shirt and short pants, was believed to be found by a security guard around 1pm.

Friends and family members were at the scene when a police team was carrying out investigation.

He said police have ruled out foul play in both incidents and have classified them as sudden deaths. (theborneopost)
Posted by sabahkini.net at 13:31