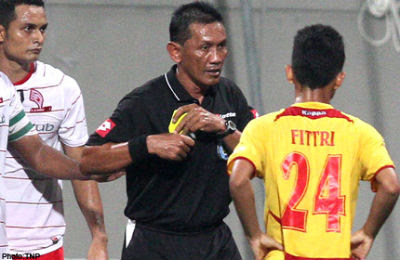 CHARGE.....Malaysian referee, Shokri Nor, 47, (in black) was charged with one count of corruption.

Malaysian referee, Shokri Nor, 47, (in black) was charged with one count of corruption He has been a police officer for more than 20 years. His division is in charge of the security of the Royal Malaysian Police's headquarters in Penang. The Malaysian is also a part-time football referee.

And it was this role that landed him in trouble with the law in Singapore.

At the Subordinate Courts on Thursday, Shokri Nor, 47, was accused of conspiring with Malaysian businessman Thanasegar S Sinnaiah, 38, to fix the result of Singapore's LionsXII match against Sarawak FA in the Malaysian Super League earlier this week.

Shokri, a lance corporal, and Thanasegar, a former state and national footballer, were charged with corruptly agreeing to receive RM15,000 (S$6,000) to fix the match.

Shokri, who had been appointed by Football Association of Malaysia (FAM), was originally assigned to officiate in the match at Jalan Besar Stadium in Singapore on Tuesday.

But he was replaced at the last minute by another referee for the match won 3-0 by LionsXII.

By then, Shokri was assisting the Corrupt Practices Investigation Bureau (CPIB) in its investigations. (The New Paper)