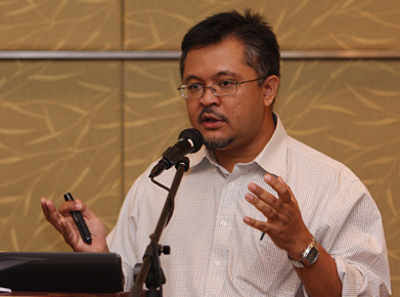 KUALA LUMPUR : Independent pollster Merdeka Center today defended the accuracy of its recent voter survey against the Election Commission’s (EC) criticisms, and reminded the authority that the same methodology was used to rate the prime minister’s popularity.

The research firm’s director Ibrahim Suffian said that Merdeka Center’s past voter opinion polls had always returned fairly accurate results, such as surveys done to predict the possible results of general or by-elections.

He pointed out that Merdeka Center’s projections for Election 2008 had also fallen close to the actual results, which saw the ruling Barisan Nasional (BN) lose its customary two-thirds parliamentary majority.

“After that, we have been continuously conducting surveys ahead of by-elections and generally, the results have been very close... within two per cent of the outcome,” he told The Malaysian Insider.

“We have been doing this regularly since late 2003 and we have continuously improved on our methodology and worked to strengthen the sampling of respondents over time.

“Therefore, I am confident that our last survey is reflective of the Malaysian public and was done professionally,” Ibrahim (picture) insisted.

He was asked to respond to EC deputy chief Datuk Wan Ahmad Wan Omar who had cast doubt on its latest survey showing that nearly half the electorate in the peninsula distrust the country’s polls process.

The research house had found that 92 per cent of voters want the electoral roll cleaned up before elections are held, while 48 per cent agreed that the present electoral roll was inaccurate.

Only 34 per cent thought the Parliamentary Select Committee on electoral reform was “a sincere effort” by the Barisan Nasional (BN) government “to reform” while 43 per cent thought it was an “attempt to cover up or divert public attention”.

The survey, conducted just days before the Bersih 3.0 rally for free and fair election on April 28, polled 1,019 voters who were selected from all states across the peninsula through the random stratified sampling method along the lines of ethnicity, gender, age and state.

The survey’s margin of error was estimated at ±3.07 per cent.

“Very simply, the respondents in our survey were based on our standard sampling method. We polled a representative mix of voters across the peninsula, both urban and rural, the different kinds of backgrounds and so on.

“It was the same framework used to solicit public opinion on the PM’s popularity,” Ibrahim explained.

But Wan Ahmad had questioned the credibility of those polled, suggesting that the “random” nature of the survey had caused researchers to obtain unreliable respondents from various backgrounds.

“To find a survey that truly reflects all Malaysians, we have to know the background of those who answered the survey.

“It would be better if Merdeka Center had surveyed voters who had just cast their ballots, rather than asking Rempits from the side of the road,” he had said to The Malaysian Insider.

Ibrahim, however, said that it was the EC’s right to arrive at its own opinion of Merdeka Center’s work.

He noted that it was natural for some to feel uncomfortable with the results of such polls but stressed that “we are very confident of our work”.

“The EC is entitled to its own opinion and I feel that it is just a point of view from out there. People may choose to dispute it but at the end of the day, we believe that it is reliable,” he said.

Asked for his personal opinion on the survey results, Ibrahim said the poll had pointed out that Malaysians in general want a clean and fair election and an electoral roll free from discrepancies.

“They may or may not agree with Bersih and its approaches but in terms of cleaning the roll before the polls, most Malaysians share this demand with Bersih,” he said.