JEFFREY, DON'T BE A CHICKEN! 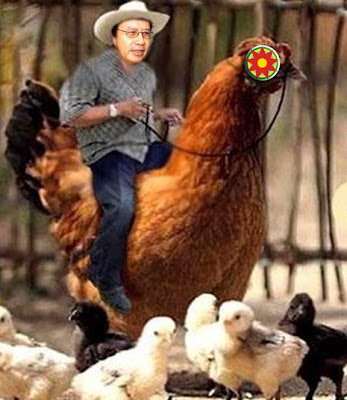 KOTA KINABALU: Former Chief Minister Tan Sri Harris Salleh described the conditions - including an international televised audience among others - imposed by Datuk Dr Jeffrey Kitingan before agreeing to debate on the issue of "Kuala Lumpur colonising Sabah" as his way of chickening out.

"There is no legal standing needed, it is a normal open public debate between two persons. It is the people who will make their own conclusion after listening to both sides.

"There is no legal authority required for a debate, maybe not even police permit. Therefore, Dr Jeffrey in demanding this and that is a mockery of present day civilisation," said Harris in a statement, Monday.

Dr Jeffrey had said that he (Harris) has no locus standi to debate with him on the issue unless he was appointed by the Federal or State government to do so.

Harris said the challenge thrown by Dr Jeffrey to Chief Minister Datuk Seri Musa Aman for a public debate on the claim is a very serious matter.

"Therefore, since it is unlikely that the State Government will get involved, I offered myself, instead, to correct any wrong perception.

In the absence of correct and accurate information, which keeps the public guessing with wrong facts, such wrong facts will lead to wrong decisions.

"Over the years and more so recently, there were many allegations and accusations against the Federal Government, including the issuance of identity cards to the illegals.

"Nevertheless, the allegation made by Dr Jeffrey that Sabah is being colonised is the turning point in the history of Sabah in the Federation of Malaysia. This is a United Nation's case. If it is true," he said.

Sabah has 25 members of Parliament, three senators and has been allocated almost all the time three Federal Minister posts.

He said that based on the parliamentary democracy system, any decision taken by the Federal Government is collective, and it also included the participation of Sabah and Sabahans.

"Surely over these years if any action taken by the Federal Government is contrary to the Constitution and laws made by Parliament, Sabah representatives would have opposed and drawn the attention of the State Government and Sabahans.

"It has been over 40 years É everything looks normal and so far so good," he said. But, out of the blue, Harris said Dr Jeffrey claimed that all these while Sabah was being colonised by the Federal Government.

"This is something new and a very serious allegation.

Therefore, and as such, it is important to go to the bottom of the allegation by way of public debate in the interests of Sabahans," he said.

Other conditions and issues raised by Dr Jeffrey were not worth responding, he said, adding it was suffice to say that to solve any problem or issue these days, it cannot be done by just simply dreaming.

"It appears that on his own admission, Dr Jeffrey wanted the international bodies or communities to be involved in the proposed debate, It shows that he adamantly refused to accept the existence of Malaysia as a sovereign and independent country ruled by parliamentary democracy, which is chosen every five years by the people. It is ruled by the majority and it is for the people," he said.

Harris said the proposed debate is an open public debate and anyone can attend including foreigners.

Hopefully, he said the television stations would be attracted to televise the debate live from Kota Kinabalu.

Of course, the public would have the last say as to whether Dr Jeffrey's allegations and accusations have any substance or not, he said.

Harris hoped Dr Jeffrey would forego his "unimaginable conditions and accept the open debate for the benefit of Sabahans."  (DE)
Posted by sabahkini.net at 13:21