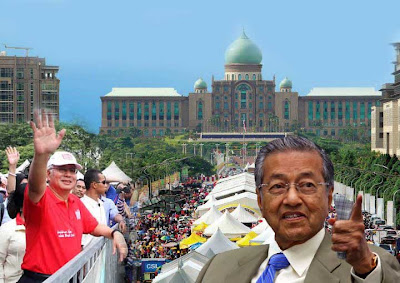 KUALA LUMPUR : Tun Dr Mahathir Mohamad has warned Datuk Seri Najib Razak that the latter is still leading a weak government, repeating his call for federal polls to be held off until after the fasting month which ends in August.

The influential former prime minister told Bloomberg in an interview published today that the prime minister should delay plans for a general election that must be held within a year.

Dr Mahathir said the prime minister should delay calling for a general election. — File pic
“Being weak, he has to respond to the criticisms. But when you are faced with this problem anything you do is not enough,” the long-serving former Barisan Nasional (BN) chief said, adding that Najib inherited a weakened coalition, which won Election 2008 by the narrowest margin since independence.

Najib took over from Tun Abdullah Ahmad Badawi in April 2009, ostensibly to reduce the record loss of 82 federal seats and five state governments with some observers saying that only a return to BN’s customary two-thirds majority can guarantee Najib’s hold on power.

Najib has promised a raft of democratic reforms to give the public more freedom but critics say they are piecemeal at best with some new legislation being more repressive than the laws they replaced.

The PM is still managing the aftermath of Bersih’s third rally for free and fair elections held on April 28 and his administration sued the electoral reform movement last week over damage to government vehicles alleged to have been caused by protestors who clashed with riot police.

Police fired tear gas and water cannons, arresting 512 people after some tried to breach the barricade blocking them from Dataran Merdeka, which the court had barred to the public over the weekend, as violence erupted between rally-goers and the police.

A survey by independent pollster Merdeka Center revealed last Friday that 92 per cent of voters want the electoral roll cleaned up before elections are held, while 48 per cent agreed that the present electoral roll was inaccurate.

Dr Mahathir also told the international business wire in an interview earlier this month that Najib should take more time before holding the next election in order to win more support from groups such as the country’s ethnic Chinese, which largely back the opposition Pakatan Rakyat.

Najib said earlier this month the election will be held “very soon” amid rumours that he would dissolve Parliament before its resumes in June.

But The Malaysian Insider reported today BN was now looking at a September election as internal surveys show it could win up to 146 parliamentary seats with at least 80 sure wins, more than the 140 won in Election 2008 but short of the 148 for a two-thirds majority.

The Najib administration has focussed on various demographics but a proposal to abolish a federal education fund by PR could cause support to sway among the youth, a key component in the electorate and comprising at least 20 per cent of the 12 million-strong electoral list.

Nearly 60 per cent of the new voters are Malays, the dominant community in the country. (TMI)