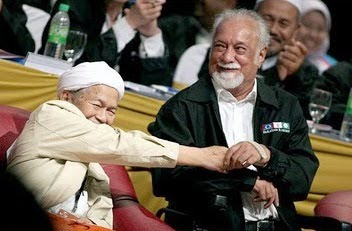 KELANTAN Menteri Besar Nik Aziz is not the last word on the Constitution or Islam, a religion which invariably gets a bad press for no rhyme or reason. Blame all the Nik Aziz in the world!

Is it any wonder therefore that a US Army training manual recently - surely it went through the usual screening process! - spoke of destroying Mecca and Medina and reducing the religion to a sub-culture, presumably for no other reason than the insane fact that it can be done, or must be done, in the wake of various justifications bordering on paranoia.

Patently, Nik Aziz's public comment on Sat that the Malaysian Prime Minister must be Muslim does not hold water. This is a slave mindset at work and one determined to squat on all of us in the belief that 72 virgins await him on the other side as his reward in eternity.

It was Lee Kuan Yew who famously remarked after Malaysia in 1963: "if these people (Kuala Lumpur) think that they can squat on us and get away with it, they are sadly mistaken."

Such eloquence would be lost on people like Nik Aziz who haven't even occupied Putrajaya but are already quarrelling with all and sundry, including a turbanless wallah, on a Prime Minister-in-waiting.

In fact, ordinarily there would be no need to dignify such an ignorant remark as that uttered by Nik Aziz. We would be more than tempted to let him wallow like the proverbial "katak di bawah tempurung" (frog under the coconut shell).

Unfortunately, DAP Chairman Karpal Singh is a glutton for punishment who gets some sort of sadistic delight from time to time in needling ignorant Muslims who are imprisoned by the addictions unleashed through tickling the religious part of their brains too much. The rest of us now have no choice but to join in a needless debate with satanic addicts doped to thy kingdom come on religion.

Next Nik Aziz will claim that God has converted to Islam as well.

It was not so long ago that he declared that God was a great liar and big samseng. He was greeted by silence over this remark. Many people mistakenly concluded that he, in his "genius", had uttered something so profound as to defy all comprehension and description and were left in even more awe of the man. So much for serious scholarship!

it was the most unscientific remark on Islam from a so-called man of the cloth. It should have shamed the ummah and jolted them out of their permanent state of hovering between being half-awake and deep in slumber with their eyes wide open while the rest of the world, many accepting non-existence as the ultimate unscientific reality, races to the edge of the universe for no rhyme or reason.

If he has nothing better to do when he's free, Nik Aziz should read the Constitution before he ventilates his appalling ignorance on matters therein in public. Hopefully, this sincere piece of advice would not be akin to casting pearls before swines.

If the Kelantan MB wants to persist in his new foolishness, his brains obviously being pickled in too much religion, he should step down from office and seriously think about joining up with the other mad mullahs among the Taliban in Pakistan.

There, he will not be like a fish out of water.

Malaysia is too much of a complication - blame it on the pendatangs from India and China - for a simpleton like him, already having to put up with indignities like being without a camel for his ride and horse dung for fuel.

Alternatively, if he refuses to step down and continues with his infinite capacity to keep shooting himself in the foot, he should be impeached for breaking the oath of office he had taken so many times. There’s always a first time.

Karpal who got into unnecessarily polemics with Niz Aziz on the PM issue should either demonstrate that's he's more than capable of shutting up the Kelantan MB once and for all or graciously concede defeat and hold his peace forever. His pass degree in law is telling.

For starters, although it's too late to complain about it now, he should not have got into a war of words with Nik Aziz on the eligibility to be Prime Minister. Why can't we cross the bridge when we come to it?

In fact, there should be no dispute on who is eligible, or not eligible, to be Prime Minister.

A non-citizen, bankrupt or someone who has been legally certified to be insane, is not eligible to hold the Prime Minister's post. We know that by virtue of occupying the MB's post, Nik Aziz is a citizen and is not a bankrupt. However, the jury is still out on whether he’s sane or should be declared legally insane.

No one can of course hold the post of Prime Minister if he or she does not command the confidence of the majority of the members in the Dewan Rakyat.

It's a numbers game in Parliament, not one of race, religion, gender, colour, the age after majority or sexual inclinations and preferences, among others.

If Nik Aziz insists on a Muslim being Prime Minister, even if he doesn't pray five times a day, what will happen if this person does not command the confidence of the majority of the members of the Dewan Rakyat? Will he or she then jump out of his or her jubbah in the birthday suit and run amok in the Dewan Rakyat, brandishing the sword all the while in one hand, and the Quran in the other?

If Nik Aziz thinks he's too smart for anyone, then he should think again. He's not smart enough. It would even be not out of place to say that he's totally dishonest and a shameless two-bit liar unless of course he really believes in his BS, pure, unadulterated or otherwise. In that case, only God can save him from his pickled-in-religion brain.

For argument's sake, and just to digress a little, both the Kerala and West Bengal state governments in the world's largest democracy – India - have routinely been headed by hardcore communist Chief Ministers.

Nik Aziz has deluded himself into thinking the Prime Minister is the head of the Muslim community.

The Prime Minister has nothing to do with anyone's religion or lack of religion.

The Sultans, since the departure of the British, have also been functioning as the head of state at the same time.

This is a serious mistake in law and the Constitution, which should be rectified at some point in time in the future. The role of head of state, presently being also held by the Sultans, should be taken over by Governors.

Karpal tells us that no one becomes ineligible for the Prime Minister's post by virtue of his or her religion. We need not thank him for this non-advice. Who asked him anyway?

Also, why is he getting into a war of words with Nik Aziz on who can or cannot be Prime Minister?

Is Nik Aziz the Agong who decides under the Constitution who can be called upon to be sworn in as Prime Minister before going on to appoint his Council of Minister?

Or are Nik Aziz and Karpal engaged in a sandiwara to convince the people that Pakatan Rakyat is poised to seize the reins of power in Putrajaya?

Many people in Malaysia, both Malay and non-Malay, are Muslim and usually by birth.  But that doesn’t make it a Muslim state or even an Islamic state, notwithstanding what former Prime Minister Mahathir Mohamad claimed during his last days in office.

Article 3 of the Federal Constitution does not specifically state that religion is the official or national religion of the country.

The majority of the land mass of Malaysia, Sabah and Sarawak, is largely Christian.

In addition, the 20 Points and 18 Points of Sabah and Sarawak respectively, along with other constitutional documents and/or conventions, vow that both states won’t have a religion.

If Nik Aziz’s stand that the Prime Minister of Malaysia must be a Muslim is shared by a majority in Peninsular Malaysia, Sabah and Sarawak are likely to wonder what they are doing in the Federation.