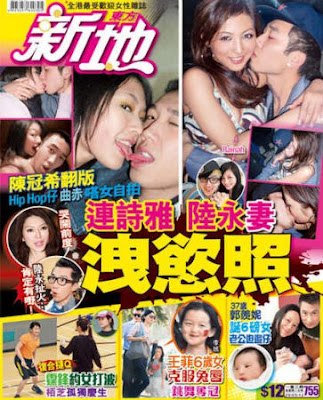 COVER.....The photos as shown on the cover of Hong Kong magazine Oriental Sunday.

THIS STORY reads like Edison Chen Photo Scandal 2.0. A Hong Kong female singer finds herself a victim of a sex scandal when pictures of her behaving intimately with her ex-boyfriend were leaked on the Internet.

Shiga Lin, 23, was shocked to find that old photographs of her with K-Chek, a relatively unknown rapper, have been exposed. There are also another batch of photos showing K-Chek with another girl - Rainah, the 22-year-old wife of FAMA member 6Wing.

The pictures were taken in 2004 - most probably at K-Chek's place - and showed a then 16-year-old Lin locking lips with K-Chek and nibbling at his ears, while the latter was seen showing his middle finger.

On Tuesday, a teary-eyed Lin had a press conference and admitted that she took the pictures with K-Chek, who was her ex-boyfriend during her high school years. She revealed that K-Chek was a friend of her classmate and they dated for a year before breaking up over personality differences.

Lin said she agreed to take the photos because she loved K-Chek very much and trusted him then.

When asked whether they had a sexual relationship, she replied: "We had done things that a couple would normally do. At this moment I don't feel like talking to anyone. I have received a lot of text messages from my friends, but I need time to get over this."

She said she had no idea how the pictures ended up being leaked and was shocked to find out through her friends.

The singer went on to reflect on her previous mistakes and promised to move on from the unpleasant episode.

"I used to hit the clubs and do a lot of meaningless stuff when I was young. Now I will work harder," she said, adding that her career is not affected so far.

There are parties - including 6Wing - who suspected that this could be a publicity stunt orchestrated by K-Chek, who is releasing an album soon. However, Lin chose not to speculate, maintaining that she has zero contact with her former flame.

Meanwhile, 6Wing is furious that his wife was dragged into the controversy. The rapper defended his wife, saying that he was aware of her previous relationship with K-Chek and pointing a finger at the latter for allegedly broadcasting the intimate details of their relationship just to court publicity.

According to him, Rainah has turned over a new leaf since they tied the knot last year. She has since stopped hitting the clubs and become a good mother and wife, he said. (Sina.com)