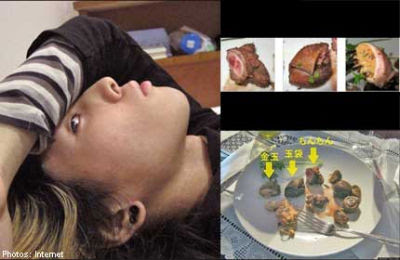 GENITAL....Check out the penis, scrotum and testicle, all seasoned and braised

A JAPANESE artist cooked his own genitals and served them to five paying diners in Tokyo to cover the medical costs, in a bizarre act to raise awareness about sexual minorities.

Mao Sugiyama had his penis and testicles surgically removed in March and kept them frozen for two months before dishing them out - seasoned and braised - to customers at an event hall on May 13, according to postings on his Twitter account and local police.

Diners paid 20,000 yen (RM768) for the plate with a portion of genitals. Pictures published on a website appeared to show the meal came complete with mushrooms and a parsley garnish. 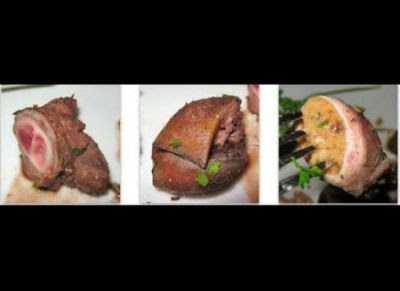 The painter, who is reportedly 22, said on Twitter the organ had been removed by a physician and certified to be free of infections.

The meal was prepared under the supervision of a certified cook and diners were required to sign a waiver indemnifying Sugiyama and event organisers.

The artist said steps were taken so the act met all relevant laws, including a ban on organ sales, processing of medical waste and even food sanitation requirements.

"I receive questions from some women and men... asking 'Will there be a next time? Please host it again.' But there is only one set of male organ," he tweeted.

"Unfortunately, I have no plan for the next time."

Sugiyama, who considers himself "asexual", that is without gender, initially thought about eating the genitals himself, but decided to solicit paying customers to help pay his hospital bills for the surgery.

In an email to AFP, he confirmed the event had taken place and said it was organised to raise awareness about "sexual minorities, x-gender, asexual people". He said he was readying to publish an official account of the day.

Police in Tokyo said they knew of the episode, but added that it had not broken the law as cannibalism was not illegal in Japan.

"We are aware of the case. There was nothing (criminal) to it. It does not violate any detailed rules. There is nothing to take action about," an officer at Suginami police station told AFP. (Agencies)