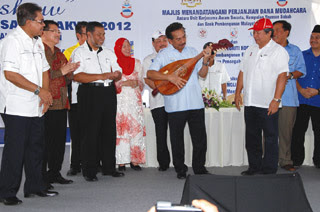 BONGAWAN: The Federal Government has allocated RM500 million as a grant to cover 10 per cent of the total cost of on-going projects worth about RM5 billion in Sabah.

Chief Minister Datuk Seri Musa Aman, who announced this, said the RM500 million comes from the facilitation funds of UKAS to lessen the contractors' burden in providing basic amenities and other necessary infrastructures to the projects.

He said such move is also aimed at encouraging the private sector to invest in these projects that include building resorts, new townships, geothermal plant in Tawau, Sabah International Convention Centre in the State Capital and other development in technology and industrial aspects.

"UKAS has identified all these vast projects and is giving 10 per cent of the total construction cost of the projects as a catalyst to the nation's economic growth, especially Sabah.

"This 10 per cent grant is not a loan," he said, urging local entrepreneurs to grab this assistance rendered by the government for them.

Musa, who is also Finance Minister, said this a press conference after launching the 4th Sabah Foundation with the People Programme for the Interior South Zone at SMK Bongawan II here on Saturday.

The programme aims to disseminate information on development plans carried out by the government that have been implemented and benefited the people, and also to foster ties between the leaders and the local communities here with the State and Federal government departments and agencies.

"For instance, on a RM100 million project, UKAS will give 10 per cent which is equivalent to RM10 million as facilitation fund for the contractors to construct infrastructures like roads, lamp post, water, electric and drainage system among others.

"By doing so, the contractors would not feel too burdened to complete the projects as they are being assisted through the grant of 10 per cent," said Musa.

He said the RM5 billion worth of projects is proof of the BN's commitment and concern for the development needs of the people.

Meanwhile, Musa said the Bongawan and Membakut State seats would be combined to create a full district status.

"Both seats have the criteria to fulfil the requirement to be upgraded as a full district due to the request of the people and rapid development here.

"We will discuss which area is to provide the centre of local administration that will accommodate the needs of the people.