ZIYI PAID TO HAVE SEX WITH BO XILAI 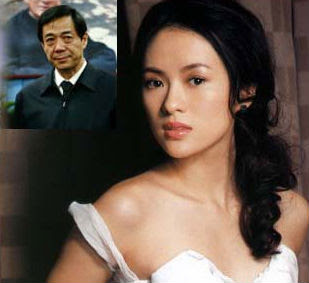 SEEMS like there is a skeleton in Zhang Ziyi's closet. The Crouching Tiger, Hidden Dragon star is reportedly under investigation by the Chinese government for being paid to have sex with disgraced former top government official, Bo Xilai.

Hong Kong's Apple daily and other Chinese media reported that the pair was first introduced by Bo's associate, Xu Ming, who is the founder and chairman of Dalian Shide Group.

The Chinese media also estimated that Ziyi's sexual transactions with various rich and powerful figures have netted her 700mil yuan (RM336mil) over the last 10 years.

Her wealth from prostituting herself was not taxed, due to intervention from Xu and other government officials.

Xu reportedly pimped the mainland Chinese actress out to two other high-level officials as well.

Media news outlets speculate that investigations into these allegations could explain why Ziyi was absent from the recently concluded Cannes film festival.

Ziyi claimed she was busy shooting the film, The Grandmasters, and was unable to attend the festival. (asiaone)
Posted by sabahkini.net at 14:21