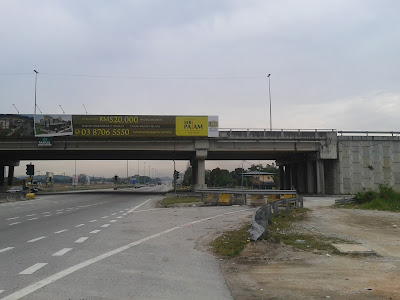 ABANDONED.....Flyover built and abandoned for years in KL.

These road junctions are having heavy traffic jam every day and the car queues can be as long as a few kilometers.

The KK MP Hiew King Cheu said the situation will get worst in a few years time, if no action is taken to build these flyovers. We can not afford to see the massive jam when the time comes. The authorities will have to make early planning and get ready to build them immediately without further delay.

These flyovers actually can be constructed quickly without difficulties if it is well planned. The construction method can adopt the use of structural steel box-girder spanning system which is light weight, cheaper, and faster to erect when compared to the traditional reinforced concrete flyover.

Many countries had used this method of construction and we can see their flyovers can be constructed very fast and even as high as five levels in one year. This can be seen in Taiwan, Korea, Japan and in China.

It is sad to see that there are flyovers ready built in the Semanajong highway but just left there doing nothing as if they are built ready for the next ten years. What happened to the flyovers which are built and left idling?

There seem no logic and there must be something seriously wrong in the planning and their implications. The government should be blame for this type of bad planning. Just look at the few flyovers on the highway from KL to KLIA, there are at least three places were built with flyovers of no purpose.

We, in Kota Kinabalu is in need of the flyovers for many parts of the KK City, but why the authorities never border to get these built, and instead letting the problems of traffic jam persistently giving us trouble daily. The BN government did nothing to help the people in Sabah, and in fact they never take care the well being of the people in Sabah. Why should we be the second class citizens of the country, and get ill-treated?

KK MP Hiew wants some action to be taken to start on the building of these flyovers immediately. This is of importance and it is compulsory. The public interest may be taken as priority and shouldn’t be sweep aside and forgotten. The traffic circulation committee of the JKR must get their minister to sit down to start work.

The people shall use their votes to decide on keeping their employed minister or sack him to change to employ someone who can do the job for them. A sleeping “Manager” (Wakil Rakyat) will not do them any good.