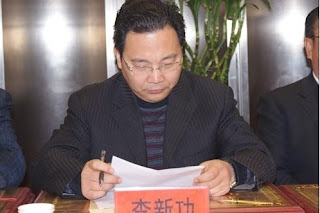 LI XINGONG, (Picture) who was the party's Deputy Head in Yongcheng city of Henan province, is accused of sexually assaulting more than ten girls during police interrogations, the official Xinhua news agency reported.

City authorities have "ordered swift and severe punishment on the suspect in accordance with relevant laws", the report added.

The case has been widely discussed on China's wildly popular Twitter-like microblogging site Weibo, after reports about the rapes naming him as the perpetrator began circulating online over the past week.

"Officials these days are all like this. It's really terrible," wrote one netizen.

"These dog officials are everywhere. Only execution will sate the public's anger," wrote another. (Reuters)