BRALESS DANCER RAN OFF THE FIELD 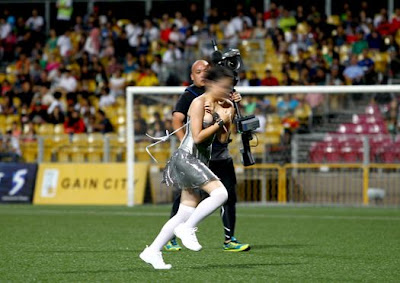 A DANCER stunned thousands of football fans in Singapore when the top of her dress slipped off during a pre-match performance. The woman was among 18 dancers performing at the Jalan Besar Stadium before the match between First XI and S. League All Stars, which was telecasted live on TV Sunday.

First, it was her blue wig that fell off about 20 seconds after the dance began. It was not clear when the strap of the dress broke, but the top suddenly slipped off - exposing her breasts.

Many of the audience members telephoned Lianhe Wanbao to inform the paper of the incident, saying the dancer continued with the performance while trying to fix the problem, but failed.

She gave up and ran off the field. Some 7,000 people witnessed the incident. (Sin Chew Daily)