JAWI DOES NOT NEED COURT ORDER 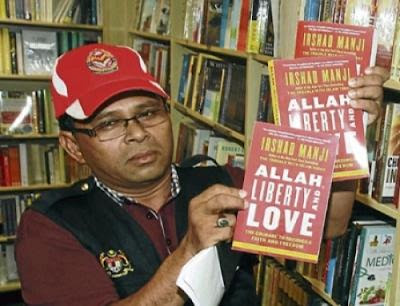 He said the seizure was carried out in the last two days according to the Syariah Criminal Offences (Federal Territories) Act on offences relating to the sanctity of Islam and its institutions including publications against IslamIic laws.

“No need for court order. We are not searching. Before coming to seize, we had already obtained intelligence on finding the book.

“If a person is accused and needs to be present in court, only then we need a court order,” he said when contacted by Bernama yesterday.

He was commenting on the statement by ZI Publications, the publisher of the controverial book, that the company was considering taking legal action against Jawi for carrying out the seizure at a bookshop in the city.

The statement was issued in news portal (Malaysiakini) yesterday, which among others, said the owner and director of the company, Ezra Zaid wanted to sue Jawi.

According to the portal, he (Ezra) said the law permitted confiscation subject to a specific order of court, something which was never produced in yesterday’s raid nor was there an official ban issued by the Home Ministry or details of what religious laws, if any, were breached.

When asked on the legal action on Jawi, Wan Jaafar said it was up to the company and added it should not be a problem.

Yesterday, the Home Ministry banned the publication of the book as it misled the people and violated syariah laws.

Its Deputy Minister Datuk Wira Abu Seman Yusop said the prohibition order was made according to Section 7(1) of the Printing Presses and Publications Act 1984 as the book’s content could shock the people and harm public security and order.

The book was banned after the ministry received complaints and comments from the Malaysian Islamic Development Department (Jakim).

Irshad, a Ugandan-born writer, holds Canadian citizenship and who is reported to support the lesbian, gay, bisexual and transgender (LGBT) movement, created a controversy with her visit to Malaysia to launch the book. Meanwhile, the Minister in the Prime Minister’s Department, Datuk Seri Jamil Khir Baharom said Jawi had the power to seize any books or articles which threaten the faith of Muslims in the country.

He said every religious agency and organisation recognised by the government had the right to seize any written work which could deviate the faith of Muslims in the country.

“Jakim, State Islamic Religious Departments (Jain) and Jawi have the right to seize any books in which the contents touch on the sensitivities of Muslims without prior permission from the Home Ministry,” he told Bernama when met at the Tuanku Mizan Zainal Abidin Mosque in Putrajaya yesterday. (Bernama)