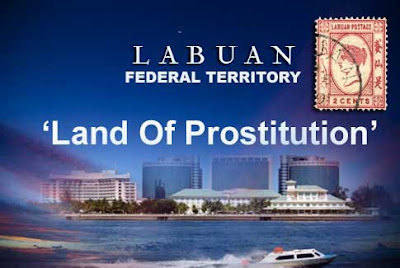 EVERYONE involved should perhaps seriously rethink - from all angles and sides - the suit pending in Court on the legality of the handover of Labuan to the Federal Government. They should consider leaving the matter in the hands of the politicians. They are the right party to take the issue to the people and the Court of Public Opinion to help resolve it.

Or do we want to merely flog the issue in Court for all it's worth and then deftly restrain the Court from ruling against the people? That will be like spinning a sob-story in Court and running away bawling loudly for all to hear.

If so, perhaps there are some who just want to make political capital out of it. However, people always remember winners and heroes.

The Court can refuse to hear arguments on constitutional conventions and neither will it interfere in matters of High Policy just as it will not interfere even with management prerogatives.

If pushed into a corner on law, not on the Constitution, the Court can and may rule that the handover of Labuan to the Federal Government was not unlawful. Is there a law prohibiting handover?

Then we will be left with referring the matter to the Federal Court on points of law, if any, and probably fighting a losing battle every step of the way.

In any case, any Court ruling that the handover was not unlawful will be a major political setback for the people of Sabah and Sarawak. Those involved in the handover will be jumping up and down with joy, if unable to do cartwheels at their age. Indeed, it cannot even be ruled out that these are the very people behind the suit pending in Court on the Labuan hand-over.

It may be difficult for the Court to rule that the handover was lawful because there's no law either on handing over territories -- at least, there doesn’t seem to be any -- and besides why should they be so foolish as to stick their necks out for the very government which continues to mindlessly squat on them under the guise of "bangsa, agama, negara", whatever it means.

Moreover, any indication of pro-Government bias on the part of the Judiciary can only further incur the people's wrath and continue to fuel their suspicions about the institution. The Kuala Lumpur and Putrajaya case histories are not applicable in the case of Labuan as they are from the other side of the South China Sea.

But will the Court rule that the handover was procedurally defective, if any? This is the only glimmer of "hope" for us but what if the Court does not go there and instead takes a simplistic approach: not unlawful. Case dismissed. Pay costs.

Sabah was not compensated even a sen for the Labuan handover unlike Selangor's experience with Kuala Lumpur and Putrajaya. In addition, the Federal Government took over all state assets and investments on the island without reimbursement.

Potentially, there's a case here for a Class Action suit if the state government hesitates to Bill the Federal Government for the acquisition of its assets. The Bill can be backdated to the handover date and carry 8 per cent compound interest until full and final settlement.

Already, the demoralized Judges don't think too much either these days especially ever since Mahathir Mohamad, given his eternal feuds with lawyers, compromised the Doctrine of Separation of Powers and virtually reduced the Judiciary to yet another government department after earlier reducing Parliament to a rubber stamp..

The culture that has emerged in the process - no respect for the brightest and best is a sign of the times.

That's why we see extremely weak candidates, who can't write a simple sentence in English, passing law a la the PSD even from foreign institutions - which are more into brainwashing in actual exam questions for a fee - and then going on to become Ali Baba lawyers. Many of these are among those supporting the Mahathir-proposed Law Academy.

That was a little digression, not a commercial break.

Even if the Court finds that the handover was procedurally defective - whatever it means - was it minor or major, both highly subjective and which we can argue till the cows come home, and if the latter, what then? Will major procedural defects mean the handover was "unlawful"? Where's the law prohibiting hand over of territories? Of course we can claim that just because we can't find such law, it does not mean it does not exist.

On major procedure, we can agree that Sabah was not partitioned into Sabah mainland and Labuan before the handover. How does one excise a part of the state and instead of giving the people the right of self-determination, hand it over to perfect foreigners - what else - on the other side of the South China Sea?

Under the Immigration Act, the people of Malaya are foreigners in Sabah and Sarawak.

Have the people of Labuan ceased to be Sabahans following the handover, and if so, where's the benefit in that for them?

It's just plain hogwash to say that Labuan had to become a Federal Territory to get development funds from the Federal Government. The people of Labuan would always want to be Sabahans, but of late to add insult to injury; they are being subjected to immigration restrictions when travelling by air to the mainland.

Has Labuan therefore been re-colonised or internally colonised? Again, will the Court rule the handover was unconstitutional? Something can be not unlawful but that doesn't mean it's not unconstitutional.

Let's not worry over whether something was constitutional but whether it was unconstitutional. That would be the right approach. The Constitution is a very wide area and beyond the expertise of most lawyers in Malaysia. One can't go from defending two-bit hoodlums one day to pontificating sanctimoniously on the Constitution the next day.

Since the Constitution is mostly about politics, not law, it must be settled politically.
Constitutional conventions - they are not law and therefore not enforceable in a Court of Law - is the practice of the Constitution and clothe its dry body with what makes it work.

The bottomline is that the handover of Labuan was unconstitutional because it was and continues to be against the politics of the people and constitutional conventions as expressed in the 1963 Malaysia Agreement, the 20/18 Points, the Inter Governmental Committee Report and the Cobbold Commission Report.

If anything is unconstitutional, it cannot be lawful since the Constitution is the Supreme Authority in the land and Parliament remains sovereign. Legislators are bound by oath to uphold the Constitution and the Rule of Law.

It's the politics of the people which eventually expresses itself in constitutional conventions and Administrative Law; the latter too not law at all but government policies in action.

However, unlike constitutional conventions, government policies can of course be challenged by way of Judicial Review provided one has locus standi - not trouble-creators, mischief-makers or cranksters - and the action is not time-barred unless the question of a continuing breach arises here.

The moral of the story on the Labuan handover: political issues must be settled in the political arena and in the Court of Public Opinion and not a Court of Law.
Posted by sabahkini.net at 01:59