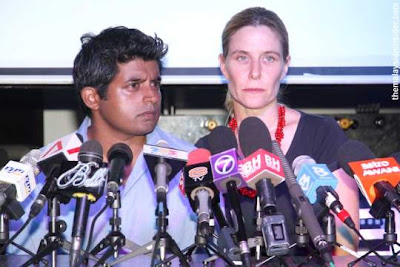 SPEAKING.....File photo of Shamelin and his wife Janice Smith speaking to reporters soon after the release of their kidnapped son Nayati earlier this month.

KUALA LUMPUR :  Dutch expatriate Shamelin Moodliar has been fired from his job for refusing to move out of Malaysia, dealing another blow to the family after the recent kidnapping and release of his son Nayati.

“My employers told me Malaysia is not safe, so they are recalling the family to the Netherlands with a week’s notice.

“I don’t think the Malaysian people deserve that statement after what they did to bring our son back.

“And how can we run away? We have to be here to make sure that the prosecution goes through,” he was quoted as saying in a report today by The Star Online.

Nayati, 12, was abducted while walking to the Mont’ Kiara International School here on April 27. He was released six days later after a RM300,000 ransom was paid.

Three men have been charged in the magistrate’s court under the Kidnapping Act 1961. The mastermind, however, is still at large and believed to be in Europe.

Shamelin, 41, a consultant with an international management firm, said the family had an obligation to see that the kidnappers go to jail “so that they cannot do it again”.

He told The Star that he was sent to Malaysia from the Netherlands eight months ago to help the company achieve its expansion goals in Asia.

The priority for the family now, he said, was to get professional help to cope with the trauma, especially for Nayati to get “back into the normal rhythm of life”.

“We were nearly broken as a family by the ordeal. Now we just got him (Nayati) back and are trying to get on with our lives, but they (the company) are using this opportunity to drive us further into the ground by trying to kick us out of here,” he was quoted as saying.

“Even though now I don’t have a job and we will lose our home, we will continue to live by our principles and stand up for what is right,” he said.
Posted by sabahkini.net at 12:18